This extremely insensitive news comes just days after Uttar Pradesh Chief Minister Yogi Adityanath told the agitating parents to "stop the drama" when they were protesting the callousness of the government and railway that led to the death of 13 children. 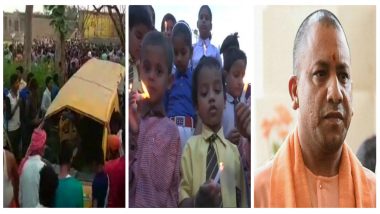 Kushinagar, April 28: In an extremely insensitive and rude gesture, showcasing lack of any sympathy for the parents of the young innocent children killed in the recent Kushinagar school van-train accident tragedy, the hospital administration has handed over the dead bodies of the children killed in the accident without even stitching back the bodies. This shocking apathy has further agitated the already grieving parents who cannot get over the fact that they lost their children due to an unmanned railway crossing.

For the parents to see the bodies of their dead children cut open and not stitched back has further lay open their wounds and added insult to injury after Uttar Pradesh Chief Minister Yogi Adityanath's inconsiderate remark. The UP CM Yogi Adityanath had told the agitating parents to "stop the drama" when they were protesting the callousness of the government and railway that led to the death of 13 children.

Meanwhile, villages have seen 13 funerals in 24 hours after the Kushinagar tragedy, and a haunting silence of death has engulfed the area and its people. Earlier this month, more than 27 school children were reported dead after a bus ferrying them fall into a gorge in Himachal Pradesh's Kangra district. The accident was reported from Nurpur area in Kangra, where a private bus ferrying 40 school students skidded off the highway and plunged into a deep gorge. The children, enrolled in the Wazir Ram Singh Memorial School, were being dropped back home when the accident occurred.

According to a Better India article highlights a shocking statistics, which says that India has more than 30,000 level-crossings at which vehicles can cross the railway tracks. Of these, more than 11,000 are unmanned crossings, and this is where most of the accidents occur.

(The above story first appeared on LatestLY on Apr 28, 2018 05:32 PM IST. For more news and updates on politics, world, sports, entertainment and lifestyle, log on to our website latestly.com).