Need No Lectures on Kashmir From 'Failed State' Pakistan: India at UN

"Even as terrorists thrive in Pakistan and roam its streets with impunity, we have heard it lecture about the protection of human rights in India," said Indian envoy Mini Devi Kumam. 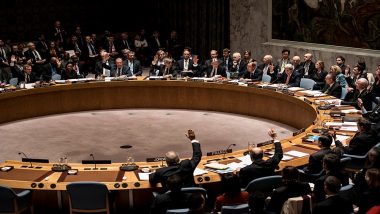 "Even as terrorists thrive in Pakistan and roam its streets with impunity, we have heard it lecture about the protection of human rights in India,"

Geneva, Mar 10: Retaliating to Pakistan's accusations of rights' violations in Jammu & Kashmir, India brought to the United Nations' notice the cross-border terrorism fueled by Islamabad to create disturbances in the Kashmir Valley. New Delhi also pointed out the "impunity" granted to UN-designated terrorists whose cadres are involved in militant attacks in J&K.

The counter-arguments from India came a day after Islamabad urged the UN to conduct a debate on plebiscite in Kashmir, alleging excesses committed by the Indian forces against civilians.

Rejecting the charges levelled by Islamabad's envoy Tahir Andrabi, her Indian counterpart Mini Devi Kumam said the "world does not need lecture from a failed state".

"Even as terrorists thrive in Pakistan and roam its streets with impunity, we have heard it lecture about the protection of human rights in India," added Kumam, the Second Secretary at India's UN Mission in Geneva

Kumam said the disturbances in Kashmir are caused due to Pakistan abetting cross-border terrorism in the Valley. To validate the charge, she sought Pakistan's response to Hafiz Saeed's claim at a recent rally in Lahore where he pledged to continue jihad in Kashmir.

"The real problem in the state of Jammu and Kashmir is terrorism, which has constantly received sustenance from Pakistan and territories under its control," she added.

While speaking on Thursday, Andrabi had demanded the implementations of UN Security Council resolutions in J&K, in order to "determine the political fate of the Kashmiris". To this, Kumam demanded the retreat of Pakistani forces from PoK.

"Pakistan very conveniently forgets its own obligation under these resolutions to first vacate the illegal occupation of Pakistan-occupied Kashmir," she said.

Kumam further pointed out that the Simla pact inked between former Indian prime minister Indira Gandhi and then Pakistan president Zulfikar Ali Bhutto, ruled out a multilateral solution for J&K. The two sides had then pledged to resolve the issues related to kashmir under a bilateral framework.

(The above story first appeared on LatestLY on Mar 10, 2018 12:31 PM IST. For more news and updates on politics, world, sports, entertainment and lifestyle, log on to our website latestly.com).