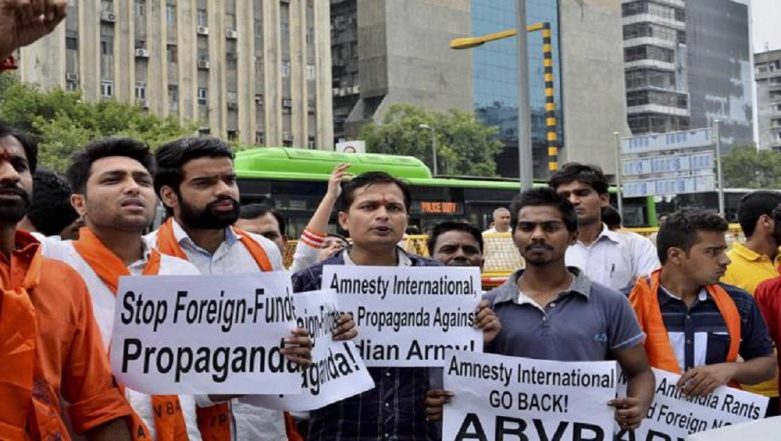 New Delhi, September 5: The Indian chapter of human rights advocacy group Amnesty International has been issued a notice by the Enforcement Directorate for alleged violation of Foreign Exchange Management Act (FEMA), officials said on Thursday. The non-governmental organisation is being probed for allegedly violating the FEMA provisions under borrowing and lending regulations to the tune of Rs 51.72 crores. PM Narendra Modi 'Must End Lockdown' in Jammu & Kashmir Immediately: Amnesty International

The notice, said the officials, was sent to Amnesty on July 25 by the Adjudicating Authority of the FEMA which is a Special Director-rank officer of the Enforcement Directorate. The notice was dispatched only after the completion of preliminary probe, they added.

(FEMA) under Borrowing & Lending Regulations to the tune of Rs 51.72 crores. pic.twitter.com/q3Y6kjsIzW

The alleged FEMA contravention is related to the borrowing and lending regulations to the tune of Rs 51.72 crore for rendering civil society activities in the country by getting remittances from its parent body, Amnesty International UK, in the garb of export of services, they said.

In 2018, the ED had carried out searches at premises and offices linked to Amnesty in Bengaluru, after the group was charged of alleged violation of the Foreign Contribution Regulation Act (FCRA).

Reacting to the raids last year on its India chapter, Amnesty UK had issued a strongly worded statement against Prime Minister Narendra Modi. "PM of India Narendra Modi promised to protect human rights. But instead he targets activists and charities," the firm had said, adding, that "strong leaders must not bully charities".

Amnesty has been critical of the Modi-led government at the Centre, and has issued several statements condemning the cases of mob lynchings being reported across the nation over the last four years. The group had, on August 15, also issued a statement condemning the Prime Minister for imposing a communication blockade in Jammu & Kashmir.