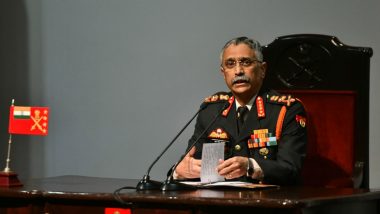 New Delhi, January 15: Indian Army chief General Manoj Mukund Naravane on Wednesday said that scrapping of Article 370 was a "historic step". Without naming Pakistan, General Naravane opined that the proxy war against India by its western neighbour was "disrupted" following the scrapping of Article 370. General Naravane made these remarks while speaking at an event to celebrate the 72nd Army Day. Army Chief General Manoj Mukund Naravane Says 'We Will Pay Special Attention to Respect Human Rights'.

"Scraping of Article 370 - a historic step - has disrupted proxy war by our western neighbour (Pakistan). It will help integrate Jammu and Kashmir with the mainstream," the Army chief was quoted by news agency PTI as saying. The Modi government, in August last year, withdrew Jammu and Kashmir's special status, granted under Article 370 of the Indian Constitution. Army Chief General Manoj Mukund Naravane Slams Pakistan, Says 'India Reserves the Right to Pre-Emptively Strike at Sources of Terror Threat'.

In an apparent warning to Pakistan, General Naravane said that the Indian armed forces have "many options to counter those who promote terrorism". "We will not hesitate to use them," he said, adding that the Indian has "zero tolerance against terrorism". Earlier this month, General Naravane said that whenever government gives the go-ahead, his force is ready to take away Pakistan-occupied Kashmir or PoK.

Making it clear that accordingly rebalancing of deployment of the forces and weapons are being carried out, the General commenting on Pakistan occupied Kashmir said: "If Parliament wants that area should be taken we will definitely do so and action will be taken accordingly."

The Indian Army chief's comments came at the annual press conference, where he said there was a parliamentary resolution that entire erstwhile Jammu and Kashmir is part of India. Whenever the government directs it will be done. Naravane stressed: "If that be the mandate so be it."

(The above story first appeared on LatestLY on Jan 15, 2020 12:26 PM IST. For more news and updates on politics, world, sports, entertainment and lifestyle, log on to our website latestly.com).