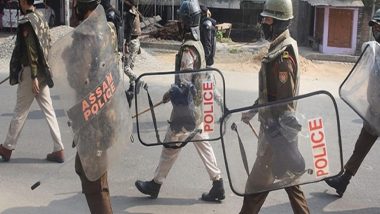 New Delhi, October 18: The Ministry of Home Affairs (MHA) convened a meeting between the Chief Ministers of Assam and Mizoram tomorrow to resolve the issues which have erupted at the borders which the two states share. The Home Ministry took cognisance of a violent clash that broke earlier today, leaving seven persons injured and a number of huts gutted in fire.

Mizoram’s Directorate of Information and Public Relations, in a statement issued earlier today, was reported as saying that seven persons on its side were injured after villagers of Lailapur in Cachar district of Assam clashed with residents of Vairengte in Kolasib district. Assam Rifles Seize WIY Tablets Worth Rs 6.5 Crore From Manipur Border Village, Burmese National Arrested.

Officials in Assam blamed the violence on "miscreants from other sides of the border". State Forest Minister Parimal Shukla Baidya, who arrived at the spot of violence shortly after the clashes were reported, appealed for restraint. He told news agency PTI that such incidents happen annually due to "illegal tree cutting activity" by elements on both sides.

Union Home Secretary has convened a meeting with Chief Ministers of Mizoram & Assam, through video conference tomorrow at 11:30 am: Department of Information and Public Relations, Government of Mizoram

An urgent Cabinet meeting was convened in Mizoram following the clashes. Chief Minister Pu Zoramthanga, who chaired the meeting, decided to reach out to the Assam government for early resolution of the issue.

"An important meeting of the Council of Ministers chaired by Chief Minister Pu Zoramthanga discussed the escalations at the borders between Mizoram and Assam, today morning," the Department of  Information and Public Relations, Mizoram government, said.

"State government is actively engaging with the government of Assam to resolve the current issues at the border areas and has also intimated Ministry of Home Affairs (MHA) regarding transgressions committed by Assam government," it said, as it put the onus on district administration of Karimganj and Cachar for the flare up.

(The above story first appeared on LatestLY on Oct 18, 2020 10:41 PM IST. For more news and updates on politics, world, sports, entertainment and lifestyle, log on to our website latestly.com).