BJP Minister From UP Rajendra Pratap Singh Caught on Camera Getting His Sandals Cleaned by Staff Member in Kushinagar; Watch Video

The incident took place when the Minister, who is the BJP government's in-charge minister for Kushinagar, was attending a tree plantation program in a college in the town. 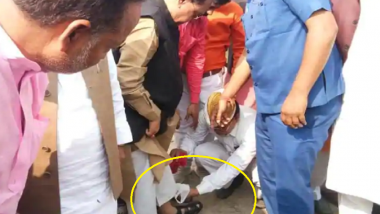 Lucknow, November 16: In another incident of VVIP racism, a Bharatiya Janata Party (BJP) Uttar Pradesh cabinet minister Rajendra Pratap Singh was caught on camera getting his sandal cleaned by a staff member on Thursday. According to reports, the incident took place at the at Buddha PG college in Uttar Pradesh’s Kushinagar when the BJP-in-charge minister for Kushinagar, was attending a tree plantation program in a college in the town.

In a video that went viral, the minister is seen holding up his kurta and pant while one of his staff members cleans the sandal with a cloth. The Bharatiya Janata Party often called as Moti Singh, blatantly denied the incident, even though the video clearly captures his acts. MNS Workers Assault Pune PVR Manager For Selling Food Items At High Price; Incident Caught on Camera.

Soon after the incident, the minister headed towards his car, where he was questioned by reporters about the act that was caught on camera. “I don’t remember anything. Nobody cleaned my sandal”, the Minister said. AAP MLA Amanatullah Khan Caught on Camera Punching BJP's Manoj Tiwari.

(The above story first appeared on LatestLY on Nov 16, 2018 11:46 PM IST. For more news and updates on politics, world, sports, entertainment and lifestyle, log on to our website latestly.com).