Chitrakoot Gangrape: Dalit Girl Dies by Suicide Days After Being Raped by 3 Men

According to reports, a girl on Tuesday died by suicide days after allegedly being gang-raped by three men. 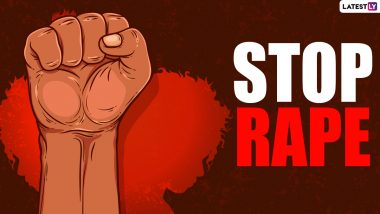 Chitrakoot, October 13: Amid ongoing outrage over the Hathras incident, another of gangrape has been reported in Uttar Pradesh. According to reports, a girl on Tuesday died by suicide days after allegedly being gang-raped by three men. The incident took place at Kaumraha Ka Purva village in Uttar Pradesh's Chitrakoot district. No was made and the victim's body has been sent for the post mortem. Uttar Pradesh Horror: Three-year-old Girl Raped, Strangled by Neighbour in Sitapur District.

The 14-year-old girl, a Dalit, was allegedly gang-raped by three upper-caste men. Speaking to News18, relatives of the victim alleged that the girl had gone to the fields to relieve herself on October 8 when three men abducted her and then raped her for several hours. She was found lying at a nearby nursery with her hands and legs tied. They said the police had been informed, but the girl could not record her statement as she was in trauma. Hathras Gangrape: Video of DM Praveen Kumar Laxkar Allegedly Threatening Victim's Family Emerges, Clarification Issued.

"My daughter was taken away on a motorcycle by three men on October 8, who did heinous things to her. When we found our daughter lying with hands and legs tied in a nursery, we brought her home. We tried to know the name of the culprits but she couldn't respond to anything as she was traumatised by the incident," the girl's mother was quoted as saying. Police said they are investigating the matter and culprits won't be spared.

"A girl committed suicide by hanging herself in her house, we are investigating the matter and trying to ascertain the reason behind the suicide by asking the family of the girl," Additional Superintendent of Police Prakash Swarup Pandey said.

The Uttar Pradesh government, headed by Chief Minister Yogi Adityanath, has been facing wrath over incidents of crimes against women in the state. A 19-year-old Dalit woman from Hathras died on September 29 in Delhi's Safdarjung hospital. She was found brutalised on September 14. According to a report by news agency IANS, in her statement to the police days after the incident, the girl stated that she was raped by four upper-caste men.

The incident evoked nationwide outrage with opposition parties slamming the BJP-ruled state over its handling of the case. The girl was cremated during midnight hours allegedly without consent from her family.

(The above story first appeared on LatestLY on Oct 13, 2020 03:52 PM IST. For more news and updates on politics, world, sports, entertainment and lifestyle, log on to our website latestly.com).