Currently, Ram Rahim is serving a 20-year prison sentence for the rape of two female disciples and is lodged at the Sunaria jail in Haryana. 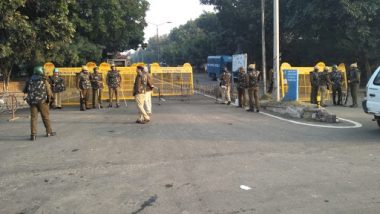 Panchkula, January 11: The Haryana state administration on Friday tightened the security cover around the quiet town of Panchkula, ahead of the verdict of self-styled godman Gurmeet Ram Rahim Singh in the murder case of journalist Ram Chander Chhatrapati. Fearing a possible law and order situation, the district of Panchkula has been put on high alert.

The CBI Special Court’s verdict has become crucial for Ram Rahim, as the latter is already serving a 20-year prison sentence for the rape of two female disciples and is lodged at the Sunaria jail in Haryana. The case relates with the murder trial of journalist Ram Chander Chhatrapati – killed on October 24, 2002, allegedly by patrons of Dera Sacha Sauda – in which Rahim is a prime accused. Gurmeet Ram Rahim Singh, Qaidi No. 8647, Grows Vegetables in Rohtak's Sunaria Jail: Here's How Much He Earns.

According to initial details, Ram Rahim would be attending the court hearing via teleconferencing, as Chief Minister Manohar Lal Khattar-led Haryana government approved the same in light of security concerns. Previously in 2017 too, the state government had made similar arrangements, citing law and order issues.

In the case related with the murder of the scribe, the prosecutor had claimed that Gurmeet Ram Rahim ordered the murder of Chhatrapati after the latter published an anonymous letter in his evening daily 'Poora Sach'. The scribe had highlighted the plight of a female disciple – allegedly sexually assaulted and harassed by the sect chief. Also, Chhatrapati had accused Rahim of exploiting other female disciples.

The matter came to light after a letter from a ‘sadhvi’ was published in Poora Sach, and the Punjab and Haryana government ordered an inquiry into the case on September 22, 2002. A few days later, Chhatrapati was murdered by two people – Dera followers Nirmal Singh, and Kuldeep Singh. Police probe had found that the weapon used in the murder belonged to one Krishan Lal.

(The above story first appeared on LatestLY on Jan 11, 2019 09:40 AM IST. For more news and updates on politics, world, sports, entertainment and lifestyle, log on to our website latestly.com).