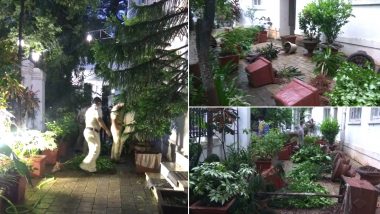 According to news agency ANI, police reached "Rajgruha" after they were informed that some people vandalised the premises. Cops were checking if miscreants were captured in CCTV cameras before they destroyed them. An investigation has been launched to nab the miscreants. "Rajgruha" is a memorial and house of Dr Ambedkar.

It was named "Rajgruha" in reference to the ancient Buddhist kingdom. The ground floor of the three-story building hosts a heritage museum, as a memorial to Dr Ambedkar. Ambedkar lived at Rajgruha for 15-20 years. He collected more than 50,000 books during his time at "Rajgruha", which made it one of the largest personal libraries in the world at the time of his death.

(The above story first appeared on LatestLY on Jul 08, 2020 12:09 AM IST. For more news and updates on politics, world, sports, entertainment and lifestyle, log on to our website latestly.com).