Fraud in Gurugram: Hyderabad Engineer Duped of Rs 9 Lakh by Fake Call Centre on the Pretext of Providing Job

In another instance of fraud, an engineer allegedly lost Rs 9 lakh to a fake call centre who duped him on the pretext of giving him a job with an annual package of Rs 42 lakh, police said on Wednesday. 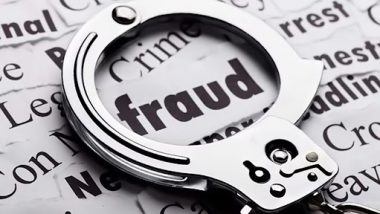 Gurugram, April 20: In another instance of fraud, an engineer allegedly lost Rs 9 lakh to a fake call centre who duped him on the pretext of giving him a job with an annual package of Rs 42 lakh, police said on Wednesday.

The cyber cell of Gurugram police arrested 22 people, including nine women, who were allegedly running the 'call centre' from Udyog Vihar, Phase 5 on April 15.

According to a report in TOI, hundreds of job seekers have been duped to the tune of at least Rs 1.25 crore in the last six months by them. Satpati, who is a resident of Hyderabad and has studied M-tech from an IIT, was among the many victims. Online Fraud in Mumbai: 31-Year-Old Software Developer Falls to E-Wallet Fraud, Duped of Rs 5.06 Lakh

He was allegedly cheated by the gang last year, following which he registered a complaint with the police in his home city, police said.

The cyber cell police of Gurugram contacted Satpati after going through the bank account transaction of the accused operating the call centre, they said. Online Fraud in Pune: Fraudster Cheats Woman of Rs 8.2 Lakh on The Pretext of Marrying Her

“I had applied for a job on a website, 'Placement.Com', after the caller took my information and assured me of giving a good job. They took Rs 9 lakh in total for registration, interview and verification of documents, on the pretext of a package of Rs 42 lakh in an MNC,” Satpati said.

“When I found myself duped, I had registered a case against the fraudsters in Hyderabad. Now that the fake call centre has been caught by the Gurugram police, I reached here to record my statement with the cyber crime police,” he said.

The cyber police team is investigating all the accounts of the accused.

Police said efforts are being made to contact the other victims as well.

(The above story first appeared on LatestLY on Apr 20, 2022 11:18 PM IST. For more news and updates on politics, world, sports, entertainment and lifestyle, log on to our website latestly.com).