PM Narendra Modi also boarded the maiden seaplane flight from Kevadia to Sabarmati. With the start of seaplane services, the distance between Statue of Unity in Kevadia to Sabarmati Riverfront will now be covered in 45 minutes, ensuring hassle-free commutation for the tourists. 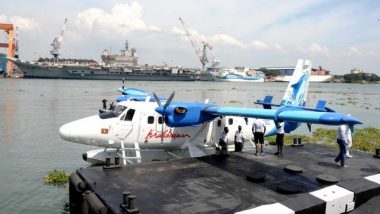 PM Narendra Modi also boarded the maiden seaplane flight from Kevadia to Sabarmati. With the start of seaplane services, the distance between Statue of Unity in Kevadia to Sabarmati Riverfront will now be covered in 45 minutes, ensuring hassle-free commutation for the tourists.

The launch of the seaplane services will also generate employment opportunities in the region and is set to give a major boost to the tourism industry. Rashtriya Ekta Diwas Pledge Full Text: PM Narendra Modi Administers National Unity Day Pledge at Statue of Unity in Gujarat’s Kevadia on Birth Anniversary of Sardar Vallabhbhai Patel (Watch Video).

Here are some important details that you should know about the seaplane services launched today:

What is Sea Plane

Seaplanes are fixed-wing aircraft capable of taking off and landing on water, offering connectivity to areas that do not have landing runways. Flying boats and floatplanes are two main types of seaplanes. These smaller fixed wing aircrafts can land on water bodies like lakes, backwaters and dams, gravel and grass.

The country’s first seaplane project is part of a directive of the Union Ministry of Civil Aviation. The seaplane service in India will be operated by SpiceJet's subsidiary, SpiceShuttle. Built by Canadian plane manufacturer de Havilland Canada, the SpiceShuttle will be utilising Twin Otter 300 seaplanes.

The new Water Aerodromes are built to host Category 2B type of floatplanes which are suitable for carrying up to 14 passengers per flight.

Speaking to media, SpiceJet Chairman and Managing Director Ajay Singh said, “We are also trying to expand this service from Kevadia to Surat. Soon many new locations in Gujarat will also be identified where we can expand this service.”

Cost of the Project

According to the data by Ministry of Civil Aviation, the first of their kind Water Aerodromes at Kevadia and Sabarmati Riverfront have both been developed at Rs 36 crore each and the terminal building area of the Water Aerodromes in Kevadia and Sabarmati is about 700 sqm. PM Narendra Modi Says Country is Establishing New Dimensions of Unity as Jammu and Kashmir Move on a New Path of Development.

Earlier in 2010, Jal Hans, a commercial seaplane service with a capacity of 10 passengers, based in the Andaman and Nicobar Islands was launched as a pilot project.

SpiceJet will ply four round-trips of the seaplanes in a day and the trip will cost Rs. 4,800 per person. The seaplane can accommodate 14 passengers per flight.

(The above story first appeared on LatestLY on Oct 31, 2020 05:32 PM IST. For more news and updates on politics, world, sports, entertainment and lifestyle, log on to our website latestly.com).