Dave said the homes and shops demolished in Jahangirpuri were more than 30 years old, and "we are in a democracy...how can this be allowed". 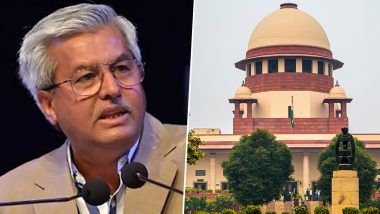 New Delhi, April 21: Senior advocate Dushyant Dave told the Supreme Court that the case of demolition drive, carried out in Jahangirpuri in Delhi, involved far-reaching questions on constitutional and national importance, and a particular section of the society is being targeted.

Dave said only properties of the poor are being demolished, and if authorities are committed to removing encroachments, then they should go to tony areas like Sainik Farms and Gold Links.

A bench comprising Justices L. Nageswara Rao and B R Gavai asked Dave, "what is the national importance in this matter... it is about an area?" Supreme Court Stops Demolition Drive in Jahangirpuri Till Further Orders.

Dave, representing the Jamiat Ulama-I-Hind, submitted that bulldozers are being used as an instrument of state policy, and a particular section of the society is being targeted.

Dave said the North Delhi Municipal Corporation (NDMC) knew that the matter would be mentioned in the Supreme Court on Wednesday morning, that is why they began demolition at 9 a.m.

Dave said how can a BJP leader write a letter to the NDMC that they should demolish, and they carry out the demolition drive.

Referring to the demolition drive in Jehangirpuri, Dave said: "These are poor people... If you want to remove encroachments, go to south Delhi, go to Sainik farms. Come to golf links, where I stay and every second home is an encroachment somewhere, but you don't touch it at all."

Dave said the homes and shops demolished in Jahangirpuri were more than 30 years old, and "we are in a democracy...how can this be allowed".

He added, "police and civil authorities are bound by the Constitution and not by letters written by a BJP leader... this is a sad scenario".

Senior advocate Kapil Sibal, representing Jamiat Ulama-I-Hind, submitted that encroachments are a serious problem all over India, but the issue is Muslims are being associated with encroachments.

Pointing to clashes which occurred on Ram Navami in various parts of the country, Sibal questioned the demolition drive carried out after these incidents took place.

At this juncture, Justice Rao asked Sibal, what is the relief that he is claiming Sibal said encroachments have been limited to a particular community and asked the court to stay demolitions until further orders.

The bench replied: "We are not going to stay demolitions in the country". Sibal said he meant demolition in Jahangirpuri.

A counsel appearing for CPI(M) leader Brinda Karat submitted that despite the court's status quo order, the demolition drive was not stopped.

After a detailed hearing, the top court extended until further orders the status quo order against the demolition drive carried out by NDMC in the Jahangirpuri area, and scheduled the matter for further hearing after two weeks.

The top court issued notice on a batch of petitions against demolition drives carried out in Delhi and other parts of the country.

Jamiat Ulama-I-Hind has filed two petitions in the matter. The top court also directed the petitioners to disclose on affidavit whether they were served notices before the demolition was carried out.

(The above story first appeared on LatestLY on Apr 21, 2022 02:05 PM IST. For more news and updates on politics, world, sports, entertainment and lifestyle, log on to our website latestly.com).