Mumbai's civic body, the Brihanmumbai Municipal Corporation (BMC), has declared holiday for all the school and colleges in Mumbai, in view of the heavy rainfall and rain forecast by the India Meteorological Department (IMD), which said that the downpour is 'expected to remain intense even on Tuesday'. 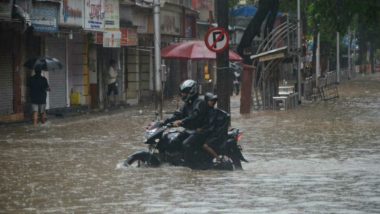 Owing to the unrelenting rain and forecast of heavy rainfall on Tuesday in Mumbai by IMD, the Brihanmumbai Municipal Corporation (BMC) has declared public holiday,  all offices, schools and colleges will remain shut today. The precautionary holiday was declared by BMC in view of the rain forecast by the India Meteorological Department (IMD), which said that the rainfall is "expected to remain intense even today". Mumbai witnessed heavy showers on Monday, that led to disruption of normal life and business in India's financial capital. Mumbai Rains: Maximum City is at Risk of Flooding Between July 3 & 5 Due to Heavy Downpour, Says Skymet Weather.

The civic body tweeted late after Monday night that schools and colleges will be shut today, following the rain forecast for Tuesday. Students and citizens of Mumbai have been advised to stay indoors "unless there's an emergency". Later BMC announced public holiday in the city.

The Government of Maharashtra has declared a public holiday in Mumbai today, for safety of Mumbai city & its citizens, in wake of the very heavy rainfall forecast by IMD #MumbaiRainsLiveUpdates #MumbaiRains #MumbaiRainsLive #MCGMUpdates

Read BMC's Tweet on Schools and Colleges Holiday Below

As per the forecast by IMD rain is expected to remain intense even today. MCGM has declared holidays in schools and colleges. We request you to stay indoors unless there’s any emergency #MumbaiRainsLive #MumbaiRainsLiveUpdates #MumbaiRains #MCGMUpdates

Watch This Video of Water-Logging From Bhandup West (ANI)

The 'Maximum' city remained drenched as heavy rains continued to lash Mumbai for the fourth consecutive day on Monday. Mumbai witnessed the highest rainfall in a decade in June this year in the last two days. According to the Brihanmumbai Municipal Corporation (BMC), 550 mm average of the entire month of June has been exceeded in the last 48 hours.

The IMD also predicted close to 200 mm or more rain per day between July 3 and 5 in Mumbai. Instances of severe traffic jams and several water-logging incidents were reported from various parts of Mumbai. The local trains, considered Mumbai's lifeline, was also delayed at several stations and places, which tested the patience of the passengers and caused discomfort to travelers. Roads and sub-ways were also flooded due to the heavy downpour.

(The above story first appeared on LatestLY on Jul 02, 2019 07:12 AM IST. For more news and updates on politics, world, sports, entertainment and lifestyle, log on to our website latestly.com).