An elderly man from Nashik has been sentenced to four years of rigorous imprisonment for abusing a minor girl. 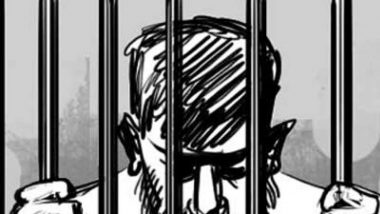 Nashik, February 28: An elderly man from Nashik has been sentenced to four years of rigorous imprisonment for abusing a minor girl. The accused is identified as 73-year-old Vitthal Nikhala, a resident of Vinchur Gaon. According to Mumbai Mirror, the incident took place in January 2017, when the victim was visiting her maternal grandparents. Navi Mumbai: Tutor Sentenced to 3 Years Jail for Molesting Minor Student in 2013.

According to the Mumbai Mirror report, Nikhala committed the crime when the victim was sleeping beside him during his visit to the region. After the crime came to light, the victims family filed a police complaint against the accused. Following which, he was booked under the relevant sections of the Protection of Children from Sexual Offences (POCSO) act. The district court has ordered four years of rigorous imprisonment and fine of 5000 to the convict. Mumbai Shocker: Grandfather Sexually Harasses Minor Girl Before Her Heart Operation, POCSO Slapped.

In a similar case from Mumbai, a 45-year-old sweeper was arrested for allegedly making lewd gestures at minor. The alleged crime took place at JJ hospital on February 9, 2019. According to reports, the minor was attending her grandmother at the hospital, when the accused made obscene gestures at her. The accused repeated his act for hours. Later, the minor narrated the whole incident to her aunt, who approached hospital staff, following which a police complaint was filed.

(The above story first appeared on LatestLY on Feb 28, 2019 04:19 PM IST. For more news and updates on politics, world, sports, entertainment and lifestyle, log on to our website latestly.com).