The Ministry of Development of North Eastern Region (DoNER), in collaboration with all the northeastern states, would take all steps to achieve the desired purposes, Shah said. The Home Minister also chaired a review meeting of the North Eastern Space Applications Centre (NESAC) at Umiam, 20 km from Shillong. 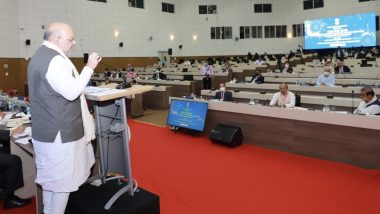 Shillong, July 24: Union Home Minister Amit Shah said here on Saturday that the northeastern region would be the countrys growth destination and all the state capitals of the eight states of the region would be connected by air and railway network by 2023-24.

On Day 1 of his two-day visit to Meghalaya, Shah inaugurated several projects, including the inter-state bus terminus at Mawiong in Shillong. Funded by the North Eastern Council (NEC), the ISBT was built at a cost of Rs 48.31 crore.

The Home Minister said that Prime Minister Narendra Modi had earlier announced that before 2022, all the capital cities of the eight northeastern states would be connected by air and railway network. Tokyo Olympics 2020: Every Indian is Rejoicing Mirabai Chanu's Historic Accomplishment, Says Amit Shah.

"But due to the Covid-19 pandemic, the works have got slightly delayed though the projects are on the pipelines. By 2023-24, all the state capitals of the eight states of the region would be linked by air and railway network, though some of the state capitals are already connected," the Home Minister said.

Shah said that improving connectivity of the northeastern states is the top priority of the Modi government, as without connectivity, development would not be possible.

"The works are being carried out with utmost priority to develop and further expand the road, rail, air and waterways networks of all the northeastern states to connect them with the rest of the country," he said.

Shah also said that the Central government led by Prime Minister Modi has done a lot of development and welfare works in all the sectors for the all-round development of the region and economic prosperity of the people of the eight states.

The Home Minister said that the Central government has three important focus points for the region -- protection and development of the region's culture and tradition; resolving internal disputes among the northeastern states; and making the region a development hub and a destination of growth for India.

The Ministry of Development of North Eastern Region (DoNER), in collaboration with all the northeastern states, would take all steps to achieve the desired purposes, Shah said. The Home Minister also chaired a review meeting of the North Eastern Space Applications Centre (NESAC) at Umiam, 20 km from Shillong.

He said that NESAC has been playing a key role in stimulating the overall growth of the northeastern region by using space science and technology.

He applauded the efforts and dedication of ‘Team NESAC' and assured that the Centre is committed to providing advanced technology support to the region, which can transform the lives of the people of the northeastern states.

"Mapping of forest gap areas, expansion of land area for horticulture development, identification and rejuvenation of wetlands, diversion of floodwater and assessment of bamboo resources for livelihood needs are a few key ideas that were discussed during the meeting," Shah said in a tweet after the NESAC meeting.

The NESAC, which is a joint venture between the Department of Space and the North Eastern Council, a regional planning body, helps and guides the northeastern states in undertaking various development projects and schemes, including estimating natural resources. Meghalaya: Union Home Minister Amit Shah Inaugurates the Interstate Bus Terminal.

Set up in September 2000, it is well equipped with state-of-the-art facilities in the areas of remote sensing and geographical information system, disaster management, satellite communication and space and atmospheric science research.

Shah also inaugurated a cryogenic oxygen plant at Umsawli, an afforestation project at Wahshari in Sohra, the Greater Sohra Water Supply Scheme at Khliehshnong, besides visiting the headquarters of Assam Rifles in Shillong.

(The above story first appeared on LatestLY on Jul 24, 2021 10:19 PM IST. For more news and updates on politics, world, sports, entertainment and lifestyle, log on to our website latestly.com).