Rajasthan: 14-Year-Old Boy Run Over by Express Train in Kota While Trying To Catch Kite Near Railway Track on Makar Sankranti

Reports inform that the incident took place when the boy was attempting to catch a kite on the railway tracks. The boy identified as 14-yr-old Kishore was a resident of the Mahatma Gandhi colony in Kota. 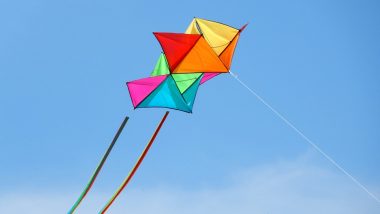 Kota, January 15: In a tragic incident, a 14-year-old boy in Rajasthan was run over by a train while he was chasing a kite and almost landed on the railway track. Reports inform that the incident took place on Makar Sankranti on January 14 in Kota. A report by Hindustan Times, the incident took place when the boy was attempting to catch a kite on the railway tracks. The boy identified as 14-year-old Kishore was a resident of the Mahatma Gandhi colony in Kota.

The report adds that the boy was crushed under the wheels of an express train on Thursday evening while he was making an effort to catch a kite on the Delhi-Mumbai railway track. The railway station is located near his house. The HT report informs that the boy was in his playful mood and did not realise that the express train- Awadh Express, was approaching from the other side.  Makar Sankranti 2021 Kite Flying: Which Manja Thread to Use to Fly Kites? Watch DIY Video to Make it At Home and Celebrate Uttarayan.

The boy didn't even pay attention to the horn and kept chasing the kite on the railway track. Police informed that the boy died on the spot and his body was  handed over to his family to perform the last rites. The HT report informs that as many as 140 people in Rajasthan have been  reported to have been injured in kite-flying incidents on the occasion of Makar Sankranti.

A similar incident was reported in Maharashtra where a young boy died in the after his throat slit by sharp thread of a high flying kite in the Sakkardara area in the South City area. The boy,  was on way to office on his motorbike, got entangled with razor-sharp thread of a kite which slit his throat.

(The above story first appeared on LatestLY on Jan 15, 2021 01:29 PM IST. For more news and updates on politics, world, sports, entertainment and lifestyle, log on to our website latestly.com).