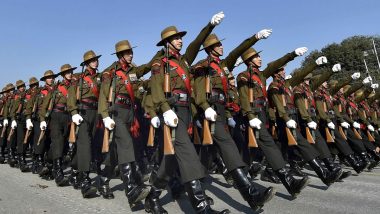 New Delhi, October 18: For better utilisation of resources and manpower, a series of measures were proposed to the Indian Army. According to a report published in The Indian Express, the proposals include doing away with Army Day and Territorial Army Day parades in New Delhi. It has also been proposed to the Army to cut down ceremonial practices including brass bands and quarter guards. The force is advised to consider the reduction in facilities such as individual officers’ mess and  in peace stations.

An exercise titled ‘Optimisation of Manpower and Resources: Review of Practices and Facilities in Indian Army’ was conducted in 2020. The measures proposed to the Army was part of a report based on the internal review of existing practices. According to the report published by the media house, the number of Army bands and pipes and drums ensembles that participate in the Republic Day parade and Beating Retreat ceremony are proposed to be brought down from 30 to 18. Military Reform: CDS General Bipin Rawat Pitches For Retirement Age Increase to Reduce Pension Expenditure.

Vijay Diwas and Kargil Vijay Diwas events should be held with llest fervour, to have one investiture ceremony in Delhi for awardees of Army HQs and other units based in the national capital, number of residential guards to be restricted to only four are among some of the proposals. In addition, multiple officers’ mess in peace stations are proposed to be merged into one station mess. Rajnath Singh Reviews Implementation of Reform Measures in Armed Forces.

Proposals have reportedly been received well in the Army but have created rippled in the force.  “A final call on the proposals will be taken at the Army Commanders Conference which is scheduled to be held later this month in New Delhi,” reported the media house quoting a senior Officer in Army HQs as saying.

(The above story first appeared on LatestLY on Oct 18, 2020 04:18 PM IST. For more news and updates on politics, world, sports, entertainment and lifestyle, log on to our website latestly.com).