Suspicious names such as "Narendra Modi", "Barack" and "Laden" have been found the list of voters in UP's Bhaisahiya village. 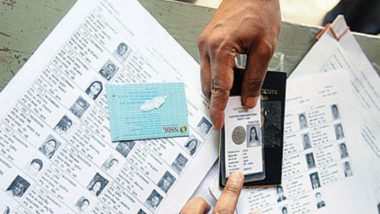 Lucknow, October 14: Ahead of the forthcoming panchayat elections in Uttar Pradesh, likely to be held next year, a block-level officer was going through the list of voters in Bhaisahiya village when he came across names such as "Narendra Modi", "Barack" and "Laden". One "Sonam Kapoor", daughter of "Anil Kapoor", "Maya" and "Shivraj" are also mentioned in the voter list as residents of Bhaisahiya. This did not stop here. Sunny Leone, Birds, Animals Replace Photos of Voters in Updated Voter List in UP's Ballia, ADM Says Operator Responsible.

The officer, BLO Pramila Devi, was shocked to see that one "Laden" whose father is "Modi" and a voter named "Pankha", son of "Check" are also on the voter list of Bhaisahiya gram panchayat. The voter list with suspicious names was last revised ahead of the 2015 panchayat elections. Pramila Devi was given the list on October for revision and correction. Aadhaar Card-Voter ID Linking: Modi Government Moves to Empower Election Commission to Link EPIC With UID.

"On October 5, I was handed over the voter list by the ADO Panchayat office to update and correct. During the review, I found the suspicious names and inquired about it. None of the names was found available in the gram panchayat," Pramila Devi was quoted by Times of India as saying. "The suspicious names were probably added by the mischief ahead of 2015 panchayat election, but now I have to rectify it," she added.

Politicians often attempt to infiltrate the voter list and include bogus names of voters. On the day of the election, their aides impersonate as those non-existent voters and help their candidates. The Election Commission routinely revise names of electorates and add new voters or delete deceased ones.

(The above story first appeared on LatestLY on Oct 14, 2020 02:41 PM IST. For more news and updates on politics, world, sports, entertainment and lifestyle, log on to our website latestly.com).