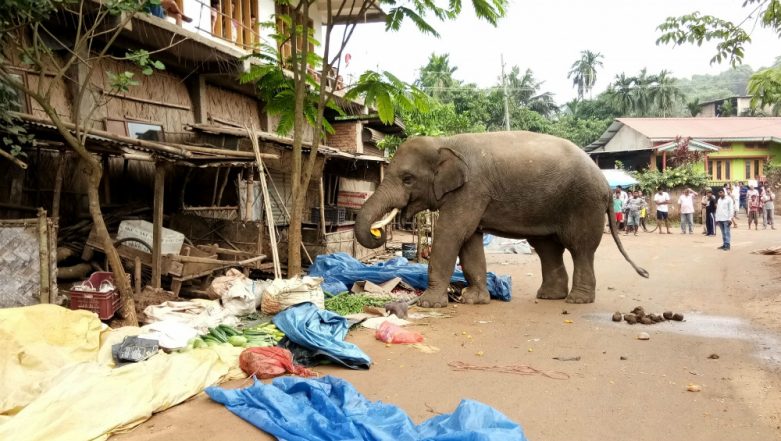 New Delhi, July 8: Getting close to wild tuskers to catch them by their tails or to click 'selfies' with the untamed animals has resulted in the tragic death of five people in Uttar Pradesh and Uttarakhand in the past one week.

The two tuskers who trampled the people were not "rogue", but those who got killed seemed to be ignorant of wild elephant's temperament, forest sources said. Elephant Creates Chaos During Temple Festival in Kerala's Palakkad; Topples Car, Injures Mahout (Watch Videos).

The tuskers who drifted away from the forests of Nepal bordering Pilibhit in Uttar Pradesh strayed into human habitats and during close encounters with the villagers, they killed five persons and injured over a dozen others in the past one week.

In an unprecedented operation, the Provincial Armed Constabulary (PAC) of the UP Police, hundreds of forest guards and several units of 'elephant patrols' have been deployd in the Rohilkhand region to tame the two giant tuskers who seem to have lost their way to the forests.

By Monday evening, the tuskers have reportedly crossed Rampur and have been spotted in Mirganj tehsil of Bareilly, a major city in UP's Rohilkhand area.

Speaking to IANS from spot in Bareilly, Lalit Verma, Chief Conservator of Forests, said that expert 'elephant handlers' from West Bengal and Chattisgarh have been deployed to tame the tuskers, who seem to have taken a detour from the elephant corridor of the Terai forests on the Indo-Nepal border.

"They are not rogue elephants. The people who unfortunately died were totally unaware of the tuskers' temperament and response. They were trampled because they either got too close the animals or tried to touch them," Verma said.

According to him, two people in Uttarakhand and three in UP have been killed so far. Sources said that one person was killed because he came too close to the elephants while attempting to click a selfie. Another person who was trampled tried to catch the tusker by its tail.

According to Verma, the tuskers entered India from the Lagha-Bagha elephant corridor on the UP-Nepal border.

"They seem to have been separated from their herd, or may be a senior male elephant might have pushed them out from the usual forest path. Once deviated from the corridor, the monsoon rains and the standing crop (of sugarcane) in the fields might have attracted them towards human habitats," said Verma, an Indian Forest Service(IFS) officer who is handling the operation to tame the tuskers.

The forest officers are of the view that the villagers, out of sheer curiosity, got close to the elephants who for the first time were encountering with humans.

"In such a situation, we should leave them (tuskers) on their own. Instead of getting near to them or trying to force them to return (to the jungle), just give them some time. They are intelligent enough to retrieve," said an officer.

Meanwhile, DIG (Bareilly) Rajesh Pandey said that PAC has been deployed in Fatehganj and nearby areas to restrict the villagers from getting close to the tuskers. The DIG is in constant with forest officers who are trying to contain the tuskers.

"Our priority is to protect the people and also to ensure the safety of the tuskers. The forest officers and their team of experts are trying their level best to contain the animals," said Pandey, a senior IPS officer of UP cadre.

"We have Kumki elephants in the South (Karnataka) and in Bengal. But it is not possible to bring them here and deploy them in the ongoing operation. That's the reason we have to depend on elephant handlers," said an IFS officer.

According to the officer, if the handlers would fail to tame the tuskers by the next 48 hours, the authorities would have to use tranquilisers to contain them.