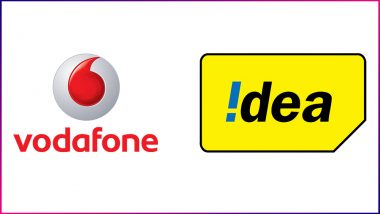 Mumbai, May 29: Vodafone Idea stock has zoomed almost 30 percent on reports that Google India is planning to pick a stake of about 5 percent in the telecom operator. The stock was trading at Rs 7.56, up 30 percent on 10:40 am on Friday.  According to a report on the Mint, the telecom joint venture of Vodafone Group Plc and the Aditya Birla Group is also in talks with private equity firms for potential investments.

Google's interest in Vodafone comes at a time when Vodafone is in the middle of extreme financial stress. The coronavirus outbreak and the lockdown have further dampened the economy in the country. Facebook last month, announced a  $5.7 billion investment in rival Jio Platforms. Facebook Announces Investment of Rs 43,574 Crore in Reliance Jio Platforms For 9.99% Stake.

A deal with Google could act as a lifesaver for Vodafone India, which owes almost Rs 54,000 crore in adjusted gross revenue (AGR) dues to the government. After a Supreme Court judgment last year, Vodafone Group’s chief executive officer Nick Read had said that the company, which holds 49 per cent stake in Vodafone Idea, would not commit any more equity in India as the “country effectively contributed zero value to the company’s share price”.

(The above story first appeared on LatestLY on May 29, 2020 10:56 AM IST. For more news and updates on politics, world, sports, entertainment and lifestyle, log on to our website latestly.com).