Who is Satish Maneshinde? Know All About the High-Profile Criminal Lawyer Who is Defending Aryan Khan in Drugs Case 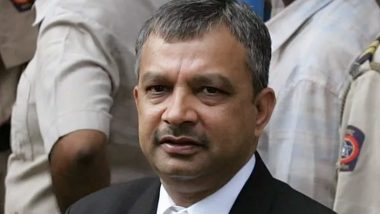 New Delhi, October 4: Aryan Khan, son of Bollywood actor Shah Rukh Khan, and seven others were arrested by the Narcotics Control Bureau on Sunday in connection to an alleged 'rave party' onboard Cordelia Cruise off Mumbai coast. Khan is being represented by senior lawyer Satish Maneshinde in the drugs case against him. Maneshinde is a well renowned name in the legal field and has been a pivotal part of the Bollywood and legal nexus. He has, in the past, successfully defended several high profile cinema celebrities including Salman Khan, Sanjay Dutt among others .

The NCB detained Khan and seven others- Arbaz Seth Merchant, Munmum Damecha, Nupur Satija, Ishmeet Singh Chadha, Mohak Jaiswal, Gomit Chopra and Vikrant Chhokar- on Saturday following a raid in at the cruise liner. The bureau recovered 13 grams of cocaine, five grams of MD, 21 grams of hashish and 22 pills of Ecstasy and Rs 1.33 Lakh in cash from the cruise. On Sunday, the NCB arrested them. Following which Maneshinde was roped in to defend Khan in the drug case. Drugs on Cruise Ship Case: NCB Looking at Bollywood Connection After Arresting Eight Youngsters, Including Aryan Khan, Over Consumption of Illegal Drugs.

Here Is All You Need To Know Satish Maneshinde:

Maneshinde is a high-profile criminal lawyer who started his practice as a junior lawyer under late Ram Jethmalani for almost a decade. Salman Khan had also been on Maneshinde's Bollywood clientele. He defended the actor in 2002 drunk driving case and secured bail for him. Khan was latter acquitted by the court in the case. The high-profile criminal lawyer, who has handled several delicate cases of big Bollywood celebrities, is known to charge hefty fee for each hearing.Aryan Khan Drug Case: Salman Khan Pays a Visit to Shah Rukh Khan at his Residence In Mumbai (View Pics).

The 56-year-old lawyer first rose to fame for represented Bollywood actor Sanjay Dutt in Bombay blast case in 1993. He was successful in securing bail for Dutt at that time. Maneshinde was reportedly also a part of the legal team that defended the Munna Bhai actor in the Arms Act case in 2007 when the latter was booked for possession of illegal weapons.

The Aryan Khan-Cruise Party Drug Case is not his first time for representing a Bollywood-linked accused in matter related to possession or consumption of illegal drug. Last year, Maneshinde was in news for defending actress Rhea Chakraborty and her brother Showik Chakraborty after the duo were arrested by the NCB in a drug case following the demise of actor Sushant Singh Rajput. The Chakraborty siblings are currently out on bail.

(The above story first appeared on LatestLY on Oct 04, 2021 06:00 PM IST. For more news and updates on politics, world, sports, entertainment and lifestyle, log on to our website latestly.com).