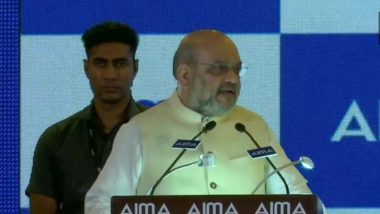 New Delhi, September 17: Union Home Minister Amit Shah on Tuesday said that from August 5 till September 17, there has been not a single bullet that has been fired in Kashmir ever since Article 370 was abrogated. According to an ANI tweet Shah said, "No life has been lost. Kashmir is open with an atmosphere of absolute peace." Article 370 Abrogated From Jammu and Kashmir: Home Minister Amit Shah Proposes Scrapping of the Article, What Does the Article State?

Shah further asserted that  Modi government will not tolerate any breach of India's territory and is ready to deal with any such acts strongly. "We will not tolerate even an inch of breach of our territory. We will deal with it strongly. We will not allow any drop of blood of our soldiers go in vain," he said while addressing an event of the All India Management Association. Amid India-Pakistan Tensions, Donald Trump Says He Will Meet PM Narendra Modi And Imran Khan Soon.

Union Home Minister Amit Shah: From 5 Aug 2019 till 17 September, not even a single bullet has been fired in Kashmir during this time. No life has been lost. Kashmir is open with an atmosphere of absolute peace. pic.twitter.com/fA1xjMufl3

On August 5, Amit Shah led from the front in Parliament as he introduced the resolution to scrap Article 370 from Jammu and Kashmir and also proposed bifurcation of the state into two Union Territories. As he introduced the Jammu and Kashmir Reservation (Second Amendment) Bill, he also proposed two 'historic' resolutions. One of them was the scrapping of Article 370 in J&K while the other was bifurcating the state into two Union Territories - Jammu and Kashmir with legislature and Ladakh without legislature.

(The above story first appeared on LatestLY on Sep 17, 2019 01:33 PM IST. For more news and updates on politics, world, sports, entertainment and lifestyle, log on to our website latestly.com).