BJP Ready to Re-Align With Shiv Sena, 'With Some Conditions', Says Chandrakant Patil Amid Fissures in MVA 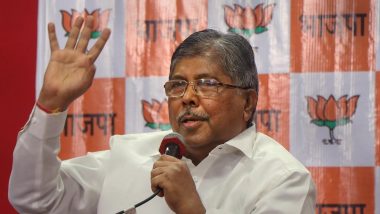 Mumbai, July 28: Maharashtra BJP president Chandrakant Patil sparked a buzz in political circles of the state, after a leading daily reported him as saying that his party is still open to re-align with erstwhile ally Shiv Sena. "Some conditions", added Patil, listing the same point of contentions that led to the split of the three-decade-old coalition partners.

According to Patil, Sena should accept the power-sharing formula that will be prepared by the central BJP leadership. The Centre will take the final call on the chief ministerial post, Patil said, adding that equal distribution of power not possible if the alliance partner has won fewer number of seats. Rajasthan to Go MP Way, Maha Vikas Aghadi Govt Will Not Last Long, Says Ramdas Athawale.

"Fighting elections together and then doing opportunistic politics is not right. How will it work when one demands an equal share in the power despite having lesser seats," Mumbai Mirror quoted him as saying.

In the 2019 assembly elections, the BJP had emerged as the single-largest party with 105 seats - but way short of the halfway majority mark. Its pre-poll ally Sena won in 56 constituencies.

After Sena supremo Uddhav Thackeray was adamant on sharing of chief ministerial post for two-and-a-half years each, it led to the split in their coalition. Subsequently, the Sena stitched up a post-poll coalition with the Congress and the NCP to form a three-party government.

Patil's remarks, though largely on lines what the BJP had reiterated during the post-election negotiations with Sena, comes amid reported fissures within the ruling Maha Vikas Aghadi (MVA).

Congress, the constituent in MVA with lowest number of seats (44), has marked its dissent to Thackeray over not being taken into consultation on key matters and alleged inequality in distribution of MPLAD funds by the NCP-controlled Finance Ministry.

Thackeray, while speaking to his party's mouthpiece Saamna last week, stoked a row by saying that steering of the three party rickshaw is in his hand. While greeting him on his birthday on Twitter, deputy CM and NCP veteran Ajit Pawar shared an image in which he is seated with Thackeray in Golf cart, but the steering is in his hand.

(The above story first appeared on LatestLY on Jul 28, 2020 06:30 PM IST. For more news and updates on politics, world, sports, entertainment and lifestyle, log on to our website latestly.com).