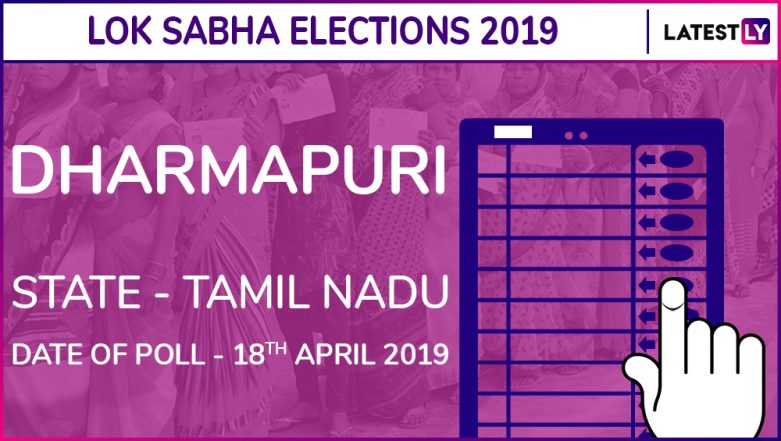 Hyderabad, May 23: The counting of votes for the Dharmapuri Lok Sabha Constituency began at 8 AM on Thursday, May 23. This is one of the 39 Parliamentary constituencies in Tamil Nadu which went to poll on April 18.  Dharmapuri, a city in Kongu Nadu region in the western part of Tamil Nadu, is located at 126 km from Bengaluru and 300 km from Chennai. The total geographical area of Dharmapuri District is 4497.77 km, that is, 3.46% of Tamil Nadu. The constituency number of Dharmapuri is 10 and is not reserved for any category i.e. it falls into the General Category.  Lok Sabha Elections 2019 Schedule: Voting In 7 Phases From April 11 to May 19, Counting And Results On May 23; Check All Dates For General Elections.

In the run up to the 2019 Lok Sabha Polls, the Pattali Makkal Katchi (PMK) has fielded former Union Health Minister Anbumani Ramadoss in Dharmapuri while the Amma Makkal Munnetra Kazhagam (AMMK) has given its ticket to P. Palaniappan. Tamil Nadu Lok Sabha Elections 2019 Dates: Constituency-Wise Complete Schedule Of Voting And Results For General Elections.

Polling in all the 39 parliamentary seats of Tamil Nadu will be held in the second phase on April 18. The counting of votes will take place on May 23. Out of the 39 Lok Sabha seats in Tamil Nadu, the BJP to contest 5 seats while the AIADMK is contesting on 27 seats. The last day of filing nomination for the polls in March 26 while the last day of withdrawal of candidature is March 29.