The central government on Monday announced that everyone above 18 years of age will be eligible to get vaccinated against COVID-19 from May 1, liberalising the vaccination drive to allow states, private hospitals and industrial establishments to procure the doses directly from manufacturers. 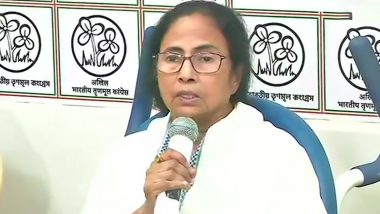 New Delhi/Calcutta, April 20: West Bengal Chief Minister Mamata Banerjee on Tuesday wrote to Prime Minister Narendra Modi, hitting out at the Centre's new vaccine policy and terming it "hollow, without substance and a regrettable show" of evasion of responsibility.

The central government on Monday announced that everyone above 18 years of age will be eligible to get vaccinated against COVID-19 from May 1, liberalising the vaccination drive to allow states, private hospitals and industrial establishments to procure the doses directly from manufacturers.

"I am informed that the central government has announced the much-delayed universal vaccine policy on 19th April, 2021, which appears to be hollow, without substance and a regrettable show of evasion of responsibility by the central government at a time of crisis," Banerjee said in the letter. West Bengal Assembly Elections 2021: EC Transfers Four Police Officers in Bengal Ahead of Sixth Phase.

She also reminded the prime minister that she had in a letter dated February 24, 2021 requested his intervention to allow West Bengal purchase vaccines directly with state resources and give free vaccination to people of the state.

"No response was received from your end. Now when the number of cases in the second wave of COVID is spiralling like anything, the Centre has chosen to tactically indulge in empty rhetoric and shy away from its responsibility for making available vaccines to the people of the country," Banerjee wrote.

She pointed out that the announcement made on Monday did not address major issues like ensuring quality, efficacy, stable flow of supply of required number of doses by the manufacturers and also the price at which the vaccines are to be purchased by the states.

"It is apprehended that the announced policy might lead to unscrupulous mechanisms in the market, including pricing of vaccines as it appears to be based on market prices which may put the common people under huge financial burden.

"More importantly, the supply would also become very erratic because the vaccine manufacturers are hardly prepared to scale up their production capacities to the desired levels to meet the nationwide demand," the West Bengal chief minister said.

She added that the required vaccines are not currently available in the market and requested for steps to ensure their availability at the earliest. "In sum, I would earnestly request you to kindly ensure a fair, transparent and credible vaccination policy addressing all the issues outlined above, which would enable the people of the country to get vaccines urgently at affordable prices as per current scale as applicable," Banerjee said.