PM Narendra Modi Breaks Silence on 'Farzi OBC' Row in UP, Says, 'I Belong to Just One Caste, Whatever Caste The Poor Belong To' 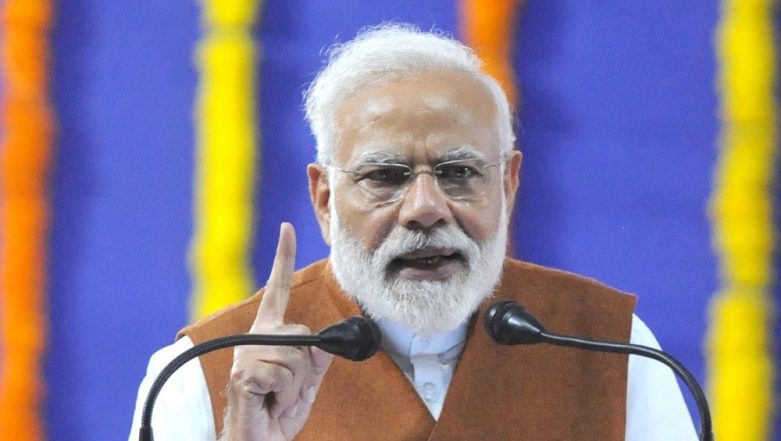 New Delhi, May 11: Prime Minister Narendra Modi on Saturday hit out at Opposition alliance in Uttar Pradesh for raising questions on his caste. Attacking Bahujan Samaj Party chief Mayawati's remarks on ‘farzi backward’ and a ‘fake OBC’ leader, PM Modi said that he belongs to 'whatever caste the poor belong to'.

Addressing an electoral rally in Uttar Pradesh, the BJP stalwart said, as reported by PTI, "They (SP-BSP) have started a new thing about my caste. I want to tell them that Modi belongs to just one caste – whatever caste the poor belong to, I belong to that caste." Not Backward, But Extremely Backward': PM Narendra Modi Hits Back at Mayawati on Caste Row.

Attacking the BSP-SP alliance in Uttar Pradesh for the Lok Sabha Elections 2019 and calling it a ‘mahamilavati’ (adulterated), PM Modi said that these parties have destroyed Uttar Pradesh and alleged that they have joined hands to save themselves from being destructed.

Calling the third front government’s act ‘no way less than a crime’, PM Modi said, as quoted by Indian Express, "Many people connected with our security and intelligence agencies have written a lot about this. They have written how they had made the intelligence network hollow and the country had to bear its consequences for long."

Ending his speech, the Premier claimed that 'whenever there is a ‘mahamilawati’ government in the country, it has threatened national security'.