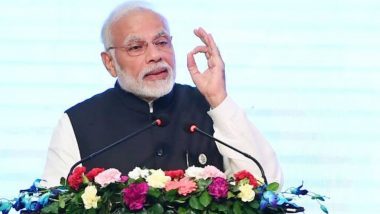 Mumbai, January 23: Prime Minister Narendra Modi for the first time shared his experiences from the Himalayan days and journey that he undertook as a young man and described its impact on him and his life.  The PM, talking to Humans of Bombay, said that “After coming back from the Himalayas, I knew that I wanted my life to be one that is lived in the service of others."

This is the third installation of what is a five part series where the Prime Minister has spoken about his life from scratch to the current times. The first part of the interview was published on January 5, 2019, while the second part was shared on Facebook on January 9, 2019.

The third part carries on from where the second part of the interview ended. In the first part PM Modi spoke about his childhood struggles. In the second, he spoke about how he surrendered himself to God and left for the Himalayas at the age of 17. PM Narendra Modi Interacts With 'Humans of Bombay', Shares His Childhood Journey to Becoming a Politician.

In this part, the Prime Minister has described how he settled down in Ahmedabad and became a full-time pracharak for the RSS. He has also put light on how the journey to the Himalayas and the lessons that he learned there have stayed with him till date.

The Prime Minister urged everyone, especially the young people, to take some time off. The PM said that "In the midst of your fast paced life and busy schedules, take some time off…think and introspect. It will change your perception – you will understand your inner self better. You will start living in the true sense of the word. It will also make you more confident and undeterred by what others say about you. All of these things will help you in times to come. So I just want each and every one of you to remember that you are special and that you don’t have to look outside for the light...it’s already within you.”

(The above story first appeared on LatestLY on Jan 23, 2019 01:25 PM IST. For more news and updates on politics, world, sports, entertainment and lifestyle, log on to our website latestly.com).