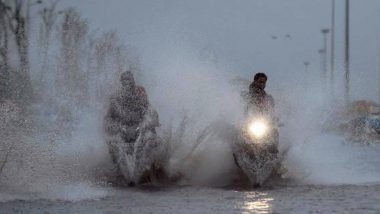 A statement from the state water resources minister's office said that the department will issue the second flood alert only if the water level in Vaiga touches 68.5 ft. Daily Weather Forecast and Warning Video for Next 24 Hours Dated 21.07.2021

The southern districts of the state have been experiencing intermittent rains for the past few days and weather has been cloudy. The water levels in the catchment areas of prominent dams have received good water flow.

The water level of Vaigai dam crossed 66 ft on July 9 and this led to the issuing of the first flood warning.

On Tuesday, the water level of Vaigai dam touched 68.29 ft against its maximum of 71 ft. The third warning is expected if it breaches 69 ft.

The inflow has reduced and hence the water level has not yet touched the 68.5 ft mark to issue the second flood warning.

(The above story first appeared on LatestLY on Jul 21, 2021 05:23 PM IST. For more news and updates on politics, world, sports, entertainment and lifestyle, log on to our website latestly.com).