The Congress, which was targeting the right-wing leaders over the alleged scam in purchase of land for the Ram temple trust, has now landed in a major controversy itself. 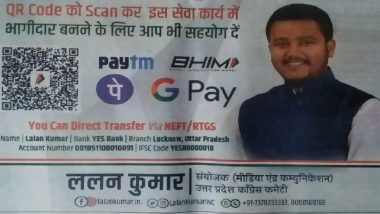 Lucknow, June 21: The Congress, which was targeting the right-wing leaders over the alleged scam in purchase of land for the Ram temple trust, has now landed in a major controversy itself.

He has appealed for donations in his personal account, for providing aid to corona victims under the campaign named 'Madad Hamari Pahal'.

Lalan Kumar has asked for donations from the general public for the sanitization drive, ration for every household and for helping everyone.

A party worker called up Lalan Kumar and raised a strong objection to taking money in his personal account. The audio of the conversation has gone viral on social media.

Lalan Kumar is preparing to contest elections from Bakshi Ka Talab Assembly constituency. He has been active in the area since the past several months and keeps posting photographs of his social work in the area.

While Lalan Kumar insists that he has done no wrong and is merely following the party's diktat of helping the needy. "Efforts have been started to raise funds only at the behest of the people. Every penny received in donation will be given to the donor," he said.

The state Congress, however, has taken serious note of the controversy.

Congress media department chairman Naseemuddin Siddiqui said that the party did not allow this and it is a personal matter of Lalan Kumar. He said that Lalan Kumar should not have used the party's name for this.

Uttar Pradesh Congress Disciplinary Committee member Ajay Rai said that the practice was wrong and no leader can ask for donations in a personal account in the name of the party.

"The matter has just come to my notice. This will be discussed in the party," he said.

(The above story first appeared on LatestLY on Jun 21, 2021 12:32 PM IST. For more news and updates on politics, world, sports, entertainment and lifestyle, log on to our website latestly.com).