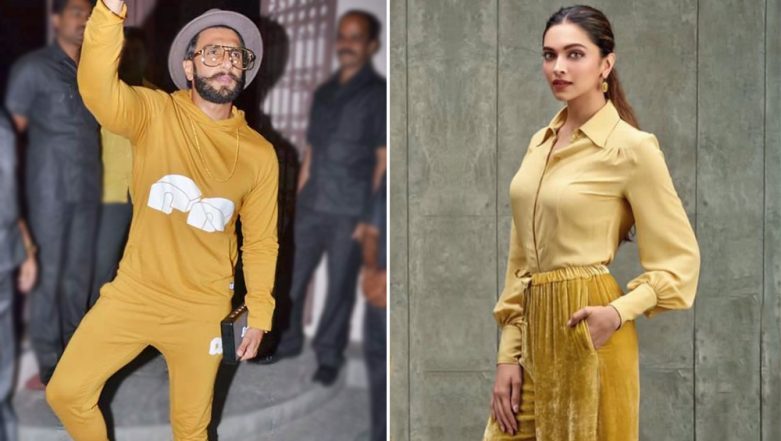 Is Deepika Padukone following Ranveer Singh's cue in the fashion department or is it vice versa? While the Gully Boy actor has publicly declared his wife as his personal stylist, we wonder if there are days when she likes to ape her beau. The actress who's currently busy juggling between her professional commitments in India and abroad was recently seen shooting for an ad campaign for Asian Paints. With the help of her ace stylist, Shaleena Nathani, DP picked yellow separates as her #OOTD and we must say, the result wasn't horrendous but charming instead. Yellow Yellow Handsome Fellow! Ranveer Singh's Recent Outfit Get a Big Thumbs Up From Us  - View Pics.

Now the colour or the entire monochrome look did remind us of Ranveer Singh's recent outing. The day when he stepped out in a yellow tracksuit with a fedora and that transistor. While it's as easy as one, two, three for RS to nail such a loud fashion but for someone as subtle as Deepika, it was a tricky task. What seemed to be a bit bold colour outfit was effectively sublimed and the end result was simply 'wow'. There's a belief that couples often start displaying each other's personality traits when they start spending maximum time together and it's definitely true in this Bajirao and Mastani's case. Deepika Padukone Turned Down a Movie Because the Hero Was Paid More than Her and We Should Be Proud - Watch Video.

Also, Deepika seems to be obsessed with velvet. While she wore a tie-up jacket in the same fabric for a casual outing in the city and later even took it to the US during her MET Gala 2018 appearance, she flaunted the same love for this recent appearance. Guess everyone is allowed a weird obsession and it's velvet in Deepika's case. We have no qualms as long as she nails it right.