n August 3, 2020, Gigi was in a mood to reminisce some of her monochrome photoshoots from the past and well she did the same. The beauty shared many posts on Instagram in which she looks sultry and sexy like never before. Check it out. 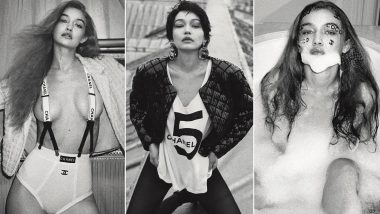 Gigi Hadid's Instagram is LIT! And we ain't saying this because she is a model and looks damn pretty in whatever she wears, but must admit that the babe exactly knows how to grab the attention of her fans. Hadid's Insta is on fire and each time she puts something on the display, it is just out of the world and fashionable. On August 3, 2020, Gigi was in a mood to reminisce some of her monochrome photoshoots from the past and well she did the same. The beauty shared many posts on Instagram in which she looks sultry and sexy like never before. However, it's one particular picture which happens to be our favourite and it's the one where she shows off her cleavage like a boss lady. Gigi Hadid's Beachwear Pictures that Prove She's Always Bikini Ready.

In the many photos, she can be seen in different positions, From posing for the lenses, on the bed, sitting on a commode to slaying it with her looks at the rooftop, these pics of the diva are pure gold. For the unversed, these rare gems from Chaos SixyNine's photoshoot back in December 2019. Must say, in each frame, she pulls off each look with equal panache and all we want to is bow down to the queen of sass. Gigi Hadid Shares A Smooching Hot Photo With ‘Baby Daddy’ Zayn Malik and We Can’t Keep Calm (View Post).

Well, it was a while back when Gigi treated her fans with a photo of herself and baby daddy, Zayn Malik, amid a smooching moment. And so, seems like, after the kissy glimpse, the girl just was missing her good old days and so she let the world know what's on her mind. FYI, Gigi and Zayn are expecting their first child together. You rock, girl. Stay tuned!

(The above story first appeared on LatestLY on Aug 03, 2020 11:45 PM IST. For more news and updates on politics, world, sports, entertainment and lifestyle, log on to our website latestly.com).