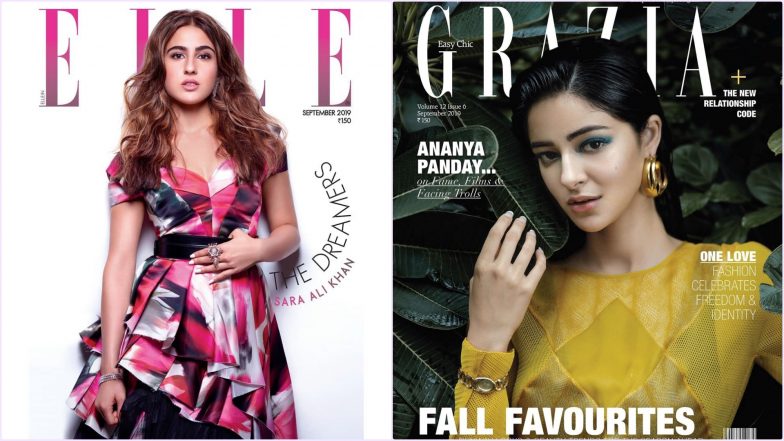 Staring with Ananya, her mag cover is set in the backdrop of a jungle. The pretty damsel is spreading her magic in a yellow panelled dress by Fendi, accessorizing it with gold plated earrings. Her metallic green smokey eyes made the look a lot edgier. Ananya Pandey Sizzles in Yellow on Cover of Grazia's September Issue! YOU CANNOT MISS THIS (View Pic).

The 20-year-old bubbly actor shared the cover on her Instagram page, which she captioned as, "King of the jungle." She also shared other pictures from the photoshoot where she is seen donning a sequinned cheetah dress with black high heels.

Coming to Sara's magazine photoshoot, Bollywood's latest heartthrob is a sight for sore eyes. Everything is all colourful and bold for the 24-year old who is donning a pink-hued silk twill ensemble paired with a black leather belt. Sara is seen flaunting her soft curls to add oomph to the cover which reads 'The Dreamers'. She is featured wearing a few glittery accessories which add the perfect contrast to her silk dress. Sara Ali Khan Looks all Chic and Glamorous as the Cover Girl of Elle India's September Issue - View Pics.

In Knit Jumper and Denim Skirt

Speaking of Ananya and Sara on the work front, the former who made her Bollywood debut with Student of The Year 2 is shooting with Kartik Aaryan for her next film Pati Patni Aur Who. Ananya is also set to star in Khaali Peeli alongside Ishaan Khatter. It will be directed by Maqbool Khan and produced by Ali Abbas Zafar.

As for Sara, she made a promising debut with Kedarnath where she shared screen space with Sushant Singh Rajput. Her second film, Simmba went onto achieve great numbers at the box office. She will next be seen in the remake of 1995 hit Coolie no 1 with Varun Dhawan. The young star will also be seen in Imtiaz Ali-directed movie opposite Kartik Aaryan. The yet-to-be-titled film is scheduled to hit the big screens on Valentine's Day next year. (Inputs From ANI)