If your holiday wardrobe needs a revamp, you know where to seek inspiration from! 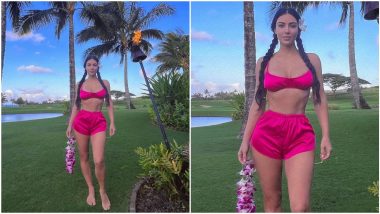 Kim Kardashian seems to be in Hawaii and that would explain her caption that reads 'Aloha'. The reality TV star who's an integral part of the Hollywood social circle, Kim K and her fam are obsessed with holidaying and their vacation pictures often make our jaw drop. While Kim is known for her lavish lifestyle, her sisters aren't far behind. Recently, the Kardashians gathered together to attend the premiere of their new Hulu series, The Kardashians in LA and it was a high-fashion event. Yo or Hell No? Kim Kardashian in Thierry Mugler for 'The Kardashians in LA' Premiere.

Now leaving that behind and obsessing over Kim's holiday look! The Keeping Up With the Kardashians actress took to her Instagram account to share pictures of her newest beach avatar and boy, is that hot! Kim looked like a sex bomb in her hot pants paired with a bralette. This outfit gave her ample scope to flaunt her toned midriff. She further styled her look with two pigtails and subtle makeup to go with it. Now, if your holiday wardrobe needs a revamp, you know where to seek inspiration from! Kim's outfit not only looks hot but also delightful and comfy! Yo or Hell No? Kim Kardashian in Her All-Black Balenciaga Look.

We wonder if Kim is holidaying with her beau, Pete Davidson in Hawaii currently. Recently, the couple was spotted together attending the premiere of her Hulu series. The comedian arrived to support his ladylove and their mushy pictures instantly warmed our hearts. On that note, here's looking forward to their pictures from the holiday! But until then, let's keep ogling at her new click, shall we?

(The above story first appeared on LatestLY on Apr 11, 2022 09:32 PM IST. For more news and updates on politics, world, sports, entertainment and lifestyle, log on to our website latestly.com).