Memorial Day 2021: Learn All About The Facts And Traditions of This Day in Honour of The Fallen Soldiers

Memorial Day has a significant history and traditions attached to it. Celebrated on the last Monday in May let's learn all about the memorial day that honours the brave men and women who lost their lives in the U.S military service. 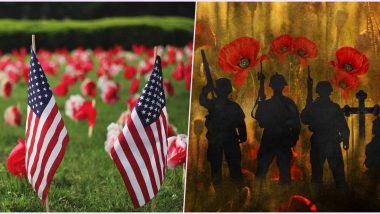 Memorial Day Weekend is upon us, and it's not all about fun-fuelled benders and rollicking good time with the family unit. Memorial Day has a significant history and traditions attached to it. Celebrated on the last Monday in May let's learn all about the memorial day that honours the brave men and women who lost their lives in the U.S military service.

It Was Originally Called Decorating Day

Initially, in the aftermath of the civil war, the holiday was celebrated by “decorating” the graves of military personnel who were casualties of war,  with flowers, flags, and more. Hence the day came to be identified as “Decoration Day.” Over time, it morphed into Memorial Day.

In the beginning, only soldiers who had died in the Civil War were honoured.

The holiday was originally conceptualized to honour the fallen soldiers in the civil war. however, during World War II united states found itself in the midst of another major war, so following the casualties the day was dedicated to fallen soldiers in all the wars including The Vietnam War, The Afghan War etc.

The Holiday was founded by Union General John A. Logan

General Logan declared 30th May as Memorial day in 1868. At the time he famously said,  “The 30th of May, 1868, is designated for the purpose of strewing with flowers or otherwise decorating the graves of comrades who died in defence of their country during the late rebellion, and whose bodies now lie in almost every city, village and hamlet churchyard in the land.”

Originally Memorial Day was celebrated on May 30th, 1971  Uniform Monday Holiday Act was passed and moved to the last Monday of May to make it a three day holiday, hence it came to be known as Memorial Day Weekend.

On Memorial Day, all states host Memorial Day parades with some organisations involving the family members of these brave veterans. The big blowout is usually in  Chicago and Washington DC.

Americans also observe Memorial Day by visiting cemeteries and memorials. There are also picnics and drinks and barbeques with the family. They also wear a  red poppy in remembrance of those fallen soldiers. Memorial Day also unofficially marks the beginning of summer.

(The above story first appeared on LatestLY on May 28, 2021 06:42 PM IST. For more news and updates on politics, world, sports, entertainment and lifestyle, log on to our website latestly.com).