Navratri and Durga Puja: What Is the Difference? From Rituals & Idols to Bhog & Shubh Muhurat, Here's What Varies The Two Celebrations That Share The Same Spirit

Navaratri and Durga Puja are often used interchangeably as terms to refer to almost the same celebration. They do have key differences but the diety offered prayers to, is the same. The ultimate idea is to celebrate the victory of good over evil and seek blessings from Maa Durga. 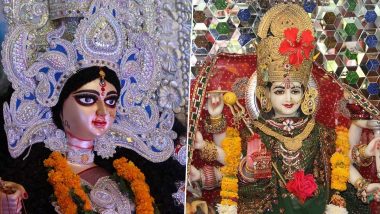 Navratri and Durga Puja, What is the difference? (Photo Credits: Wiki & File Image)

Navaratri and Durga Puja are often used interchangeably as terms to refer to almost the same celebration. They do have key differences but the diety offered prayers to, is the same. The ultimate idea is to celebrate the victory of good over evil and seek blessings from Maa Durga. The celebration, puja vidhi, idols, tenure and rituals differ slightly for Navratri and Durga Puja, however, the determination, will, belief, positivity and happiness remain the same. Navratri 2020 Ghatasthapana Timing & Puja Samagri: Why Is Kalash Sthapana Important During Sharad Navaratri? Essential Ingredients You Will Need to Offer Prayers to Maa Durga.

Here are some of the key differences between Navratri and Durga Puja:

Navratri is majorly celebrated by North Indians whereas Durga Puja belongs to the East-Indian culture involving people from Bengal and Orissa. Navratri 2020 Holy Mantra, Wishes and Greetings: Send Good Luck & Positivity to Your Loved Ones Through These Maa Durga Chants During Sharad Navaratri.

While Navratri, as the name suggests is the festival of nine nights, followed by Dussehra. Durga Puja is celebrated for a period of 10 days with the main celebration beginning from the sixth day aka Shashti when Devi Bodhon takes place.

On the sixth day, Durga puja Bengali women wear a red border white saree (Lal Paad Shada Saree_ from 5 am in the morning to Prabhat Pheri in the puja pandals. While during Navratri, on the sixth-day puja takes place in a similar fashion like the other days followed by Durga aarti. Navratri 2020: From Shailputri to Siddhidatri, Significance of Nine Forms of Maa Durga and Holy Mantras to Seek Blessings & Good Luck.

Navratri is celebrated worshipping the nine forms of Maa Durga, ending with a celebration of Lord Ram’s victory over Ravana aka the victory of good over evil. Durga Puja mainly celebrates the victory of Goddess Durga over the demon Mahishasur. Durga Pujo Nostalgia: 7 Memories People Living Away from Home Wouldn't Trade for the World!

The idols of Mother Durga differ slightly. Durga idols in Bengal flaunt the curly black long hair, big fish-shaped eyes & Bengali style culture. While during Navratri in North India, Mother Durga is shown riding on a lion with not much focus on the eyes. Check out this picture that shows the difference: 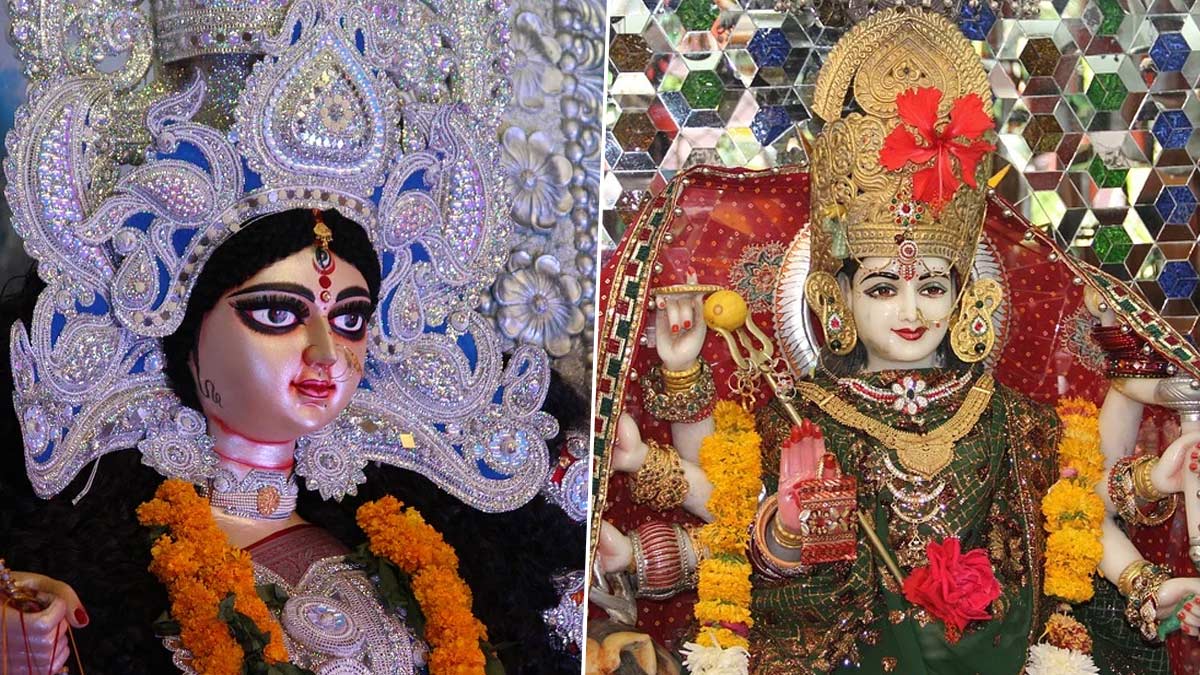 Navratri and Durga Puja, What is the difference? (Photo Credits: Wiki & File Image)

During Navrati devotees fast for 9 days in different ways while abstaining from non-veg foods like eggs, meat and some veggies like onion and garlic. However, during Durga Puja, one of the major highlights is the food. Bengalis indulge various types of non-vegetarian delicacies involving the delicious Bengali cuisine.

The first day of Durga Puja is marked on Mahalaya, a day when the battle between Durga and Mahishasura takes place. It ends with Maa Durga's victory. On the other hand, Navratri's 1st day involves worshipping Shailputri, the first avatar of Goddess Durga.

Durga Puja ends with Sindoor Khela (vermillion game), where married women put sindoor on each other, before the immersion of the idol it is followed by Vijayadashami celebrations. People wish each other a "happy Bijoya". Navratri, on the other hand, ends with Dussehra.

Durga Puja is not just a festival but is a celebration and feast that cherishes the victory of Maa Durga's victory over Mahishasur. Worship of Goddess Durga, the symbol of female power, is an important part of the Hindu household in India. The feel and spirit of both the festival is the same.

(The above story first appeared on LatestLY on Oct 14, 2020 01:36 PM IST. For more news and updates on politics, world, sports, entertainment and lifestyle, log on to our website latestly.com).