Republic Day 2023: From Preamble to Its Adoption, All You Need To Know About the Constitution of India on the Day That Celebrates Its Enactment

The Indian constitution is an important document that lays down the framework that demarcates fundamental political code, structure, procedures, powers, and duties of government institutions and sets out fundamental rights, directive principles, and the duties of citizens. Here's all you need to know about the constitution. 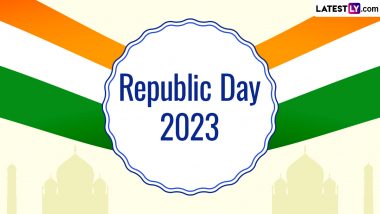 The constitution has a preamble and 470 articles, which are grouped into 25 parts. With 12 schedules and five appendices, it has been amended 105 times; the latest amendment became effective on August 15, 2021. On January 26, which is celebrated as Republic Day, India celebrates its constitution. Dr B R Ambedkar, the chairman of the Drafting Committee, is widely considered to be the architect of the Constitution of India. After the adoption of the constitution, the Union of India became the contemporary and modern Republic of India. Republic Day 2023 Parade Tickets: Know Where And How to Book Ticket For R-Day Event at Kartavya Path in Delhi.

The Constitution of India was adopted by the Constituent Assembly of India on November 26, 1949, and became effective on January 26, 1950. The constitution replaced the Government of India Act 1935 as the country's fundamental governing document, and the Dominion of India became the Republic of India. To ensure constitutional autochthony, its framers repealed prior acts of the British parliament in Article 395.

The most important thing that one should know about the Indian Constitution is that it imparts constitutional supremacy and not parliamentary supremacy since a constituent assembly created it rather than Parliament. Its people adopted it with a declaration in its preamble. The Parliament cannot override the constitution. The original constitution, which was adopted in 1950, is preserved in a nitrogen-filled case at the Parliament House in New Delhi. The words ‘secular’ and ‘socialist’ were added to the preamble by the 42nd amendment act in 1976 during the Emergency.

(The above story first appeared on LatestLY on Jan 25, 2023 11:00 AM IST. For more news and updates on politics, world, sports, entertainment and lifestyle, log on to our website latestly.com).