St Nicholas' Day 2020 Date And Significance: Know the Stories And Celebrations of the Observance That Inspired Christmas Traditions

St Nicholas' Day or the Feast of Saint Nicholas is an observance of European origin celebrated in some American communities on December 6. St Nicholas of Myra is a Christian Saint known and is regarded as the bringer of gifts. Ahead of Nicholas' Day 2020, we bring to you date, history, significance and celebrations related to the observance. 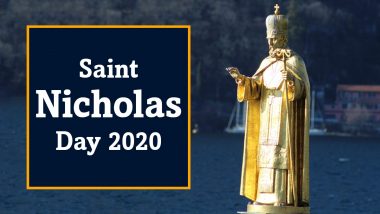 St Nicholas' Day or the Feast of Saint Nicholas is an observance of European origin celebrated in some American communities on December 6. St Nicholas of Myra is a Christian Saint known among children across Europe as he is regarded as the bringer of gifts. Both the North American Santa Claus and the British Christmas Father are believed to have derived from the myths surrounding St. Nicholas. Children whose families celebrate St Nicholas Day give them toys, candies and cookies on the day. St Nicholas' Day is celebrated on December 6 during when some churches conduct special services dedicated to the feast of St Nicholas. Ahead of Nicholas' Day 2020, we bring to you date, history, significance and celebrations related to the observance. Belgium Exempts Gift-bearing St Nicholas from Virus Bans

St. Nicholas is known by different names throughout Europe such as Sinterklaas in the Netherlands or Nikolaus in Germany. While it is not a religious observance, St. Nicholas Day is a public holiday in countries such as Australia, Canada, the United Kingdom, and the United States. St.Nicholas Day is celebrated worldwide on his death anniversary, believed to be on December 6.

Who Was St Nicholas?

St Nicholas is derived from Nicholas of Myra who was believed to be the bishop in 4th century Greece. According to beliefs, St Nicholas was born in the village of Patar, located on the southeastern coast of modern-day Turkey. He was buried in a tomb in Myra. It is called the Manna of Saint Nicholas. During his lifetime he was known for giving gifts by putting coins in other people's shoes, which is one of today's Christmas traditions that involve leaving gifts in shoes or boots. Who is Santa Claus? Surprising Facts About Father Christmas, Including His Connection With Coca-Cola.

While Christmas Father is inspired by him, in some countries like Austria, Hungary, the Czech Republic and northern Italy, there is a negative character to punish the naughty ones. The personification of evil is called Krampus, in Germany Knecht Ruprecht, and in the Netherlands Zwarte Piet.

During the third century, it was believed that a daughter’s chances of marriage increased when her father offered a large dowry to prospective husbands. It is said that a poor father who had three daughters had no dowry to offer, so St. Nicholas gave money and gold in the shoes that the family had left outside their houses to dry bear the fire at night.

(The above story first appeared on LatestLY on Dec 05, 2020 05:16 PM IST. For more news and updates on politics, world, sports, entertainment and lifestyle, log on to our website latestly.com).