When Is Akshaya Tritiya 2022? Date, Time, Shubh Muhurat, Puja Muhurat and Significance of Celebrating the Auspicious Day of Akha Teej

In 2022, Akshaya Tritiya will be celebrated on Tuesday, 03rd May. The pious Hindu observance of Akshaya Tritiya is considered the most golden day of the year because the word Akshaya means the most "Eternal" that which never diminishes. 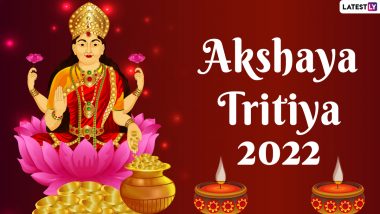 Akshaya Tritiya is considered one of the most auspicious festivals in the Hindu scriptures that falls during Shukla Paksha Tritiya in the month of Vaishakha. The occasion also known as Akti or Akha Teej is observed during the spring season. The term 'Akshaya' in English is rendered as diminishing. Hence, the advantage of performing Yajna, Pitra-Tarpan, japa, and charity on the day of Akshaya Tritiya never diminishes and remains with the person forever. The festival is widely celebrated by the Hindu communities and is considered to be the date on which the Sun and the moon are at their planetary best. Akshaya Tritiya 2022 will be observed on Tuesday, 3rd May. On this religious occasion, people also pay their respect to the departed souls of their loved ones.

Rituals And Significance Of  Akshaya Tritiya

According to Hindu mythology, the Treta Yuga began on the day of Akshaya Tritiya. Apart from this, there are numerous other beliefs from ancient and mythological history that explain why the day is considered important. In Jainism, this day is celebrated to commemorate Lord Adinatha, their first God. People also believe that on the day of Akha Teej Lord Ganesha and Ved Vyasa started writing the epic Mahabharata. Buying gold and silver during this day is considered auspicious as the metal signifies Maa Lakshmi, the Goddess of wealth and prosperity. In the Indian culture people typically starts a new business, and begin a new venture on the pious occasion of Akshaya Tritiya.

Many people choose to pray to Lord Vishnu and Goddess Lakshmi and receive their divine blessings. Folks perform spiritual activities like meditation, chanting holy mantras, and embalming the idol of Lord Krishna with sandalwood paste which is considered important to ensure good fortune in the future. Doing charity, keeping fast and organising wedding ceremonies are also contemplated pious on the day. If Akshaya Tritiya falls on a Monday, then the festival is believed to be even more auspicious.

(The above story first appeared on LatestLY on Apr 25, 2022 04:28 PM IST. For more news and updates on politics, world, sports, entertainment and lifestyle, log on to our website latestly.com).