National Doughnut Day 2021: From Beignets To Balushahi, Here Are The Best Doughnuts From Around The World

Doughnuts are not just native to the United States but can be found ingrained in different cultural cuisines. So on this Doughnut Day, let's learn more about the Best Doughnuts From around the world. 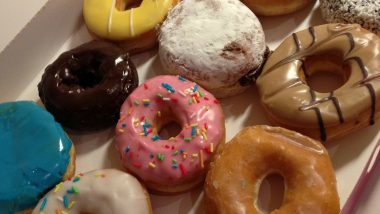 Today is National Doughnut Day which is celebrated every year on the first Friday in June, to honour the Salvation Army Lassies who served doughnuts to the troops during WWI. The first Doughnut Day was celebrated in 1938 to pay homage to the  "Salvation Doughnut Lassies." The ladies not only served doughnuts but also home-cooked meals, as a way to boost the morale of the troops at the front lines, risking their lives for the United States.

Doughnuts are a beloved dessert across the world. Round, Square, triangle, small, large, sprinkled or chocolate, doughnuts come in various shapes and sizes and different flavours. It's not limited by geographical boundaries. Doughnuts are not just native to the United States but can be found ingrained in different cultural foods. So on this Doughnut Day, let's learn more about the Best Doughnuts From around the world.

Originally invented in France and now considered a New Orleans culture food, These delicious doughnut squares are fried and dusted with confectioners’ sugar. They go great with a cup of hot coffee.

The Mexican dessert is now the most ubiquitous cinnamony delight around the world. Churros are deep-fried until golden brown and then dusted with cinnamon and sugar. It is often consumed as breakfast in Spain.

Found across Europe, Crullers are twisted fried pastries with an airy texture. Originating in France, this doughnut is made with choux pastry and then glazed with simple sugar.

Popular in  India,  Pakistan and Nepal,  Balushahi are around, a doughy, syrupy dessert made with yoghurt and fried in ghee until flaky. It is then soaked in syrup and tastes quite similar to a glazed doughnut.

Quite popular in Italy, Bombolone is a deep-fried doughnut topped with icing sugar that is either consumed as-is for breakfast in Italy or sometimes filled with crème patissière, chocolate, Nutella or jam.

Popular in Germany, Berliners are round doughy desserts that are filled with cream, jam or chocolate and sprinkled with sugar. They are also known as bismarcks.

Native to Vietnam, Bánh rán is a deep-fried ball of dough made with glutinous rice flour and filled with sweetened mung bean paste. They are then rolled in sesame seeds and sometimes dipped in sugary syrup.

As we said, it's not just all about Krispy-Kreme. Dig into these wide arrays of doughnuts from around the world and have a delicious Doughnut Day

(The above story first appeared on LatestLY on Jun 04, 2021 11:59 AM IST. For more news and updates on politics, world, sports, entertainment and lifestyle, log on to our website latestly.com).