Google Doodle features the 11 best pizza toppings from all over the world and challenges users to slice based on the type of pizza ordered in the pizza puzzle game. Read more to know why is Google celebrating the Italian dish today. 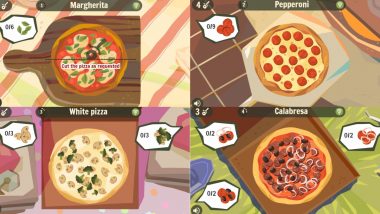 Google is celebrating pizza, one of the most popular Italian dishes in the world with an interactive Doodle! It was on this day i.e., December 6th in 2007 that the culinary art of Neapolitan “Pizzaiuolo” was inscribed on the UNESCO Representative List of the Intangible Cultural Heritage of Humanity.

The search engine giant splashed its homepage with a fun pizza puzzle featuring some of the most delicious pizza toppings from basil to mushroom to pepperoni - just about everything a crazy pizza lover would love to chomp chomp. If you click on the doodle, then 11 menus of pizza will appear in it, which users will get the option to cut into several slices. After this, users will also get stars under special programming. Which they can also share. Keep in mind that the more precise the slice, the more stars you will get.

Take A Look At The Google Doodle Here:

Today’s interactive #GoogleDoodle celebrates one of the world’s most popular dishes - pizza! 🍕On this day in 2007, the culinary art of Neapolitan “Pizzaiuolo” was inscribed on the UNESCO Representative List of the Intangible Cultural Heritage of Humanity. @GoogleDoodles pic.twitter.com/sPSFQ7Zwtb

Flatbread with toppings has been consumed for centuries by ancient civilizations from Egypt to Rome. But the southwestern Italian city of Naples is widely known as the birthplace of pizza (dough with tomato and cheese) in the late 1700s. Many changes have been seen in the method of making pizza from time immemorial till now.

What Is The Art Of Neapolitan 'Pizzaiuolo'?

According to the United Nations Educational, Scientific and Cultural Organization (UNESCO), Neapolitan art ‘pizziolo’ is a cooking practice. It involves four different steps related to preparing the dough and cooking it in a wood-fired tandoor. It also included a rotating movement of people engaged in baking operations. The movement originated in Naples, the capital of the Campania region, where about 3,000 pizzaioli now live and perform.

(The above story first appeared on LatestLY on Dec 06, 2021 10:48 AM IST. For more news and updates on politics, world, sports, entertainment and lifestyle, log on to our website latestly.com).