Not just the bride, but all the females and the bridesmaids get beautiful Henna designs on their hands. Mehndi stains are considered to bring in positivity and good luck. There are hundreds and thousands of mehndi designs available on the internet nowadays. 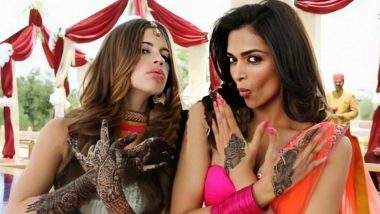 Mehendi is considered a very auspicious part of Indian weddings. People generally organise a proper mehndi ceremony during various wedding rituals. Not just the bride, but all the females and the bridesmaids get beautiful Henna designs on their hands. Mehndi stains are considered to bring in positivity and good luck. There are hundreds and thousands of mehndi designs available on the internet nowadays. We at LatestLY curated some easy and minimalist mehndi designs which would make your hands look extremely beautiful. New Semi-Bridal Arabic, Indian, Moroccan Mehendi Designs for All The Banno Ki Sahelis!

Some of the most popular mehndi designs known today are Arabic, Indian, Indo Arabic, Pakistani and Moroccan mehndi designs. Be it any festival like Teej, Rakhi, Karwa Chauth, Diwali or some wedding, females start looking on the internet for different and unique Mehndi designs. In India, female just need a reason to get mehndi applied on their hands. To make your celebrations fun and beautiful, here are some quick and minimal mehndi designs that you can get applied on your hands in the coming wedding season.

Thick mehndi designs are a trend as they make the henna design appear darker. Many women opt for Arabic designs as they are thicker. Here is a list of some beautiful Arabic mehndi designs for the bridesmaids to flaunt their hands this wedding season.

The darker the mehndi, the beautiful it appears. Also, It Is said, the darker the mehndi colour is, the more love you will get from your husband. So many ladies put a mixture of lemon and sugar over the mehndi as it dries so that it sticks for the maximum time and gives out the maximum colour. Also, after removing the mehndi, many females apply Vicks or mustard oil over it because it makes the colour dark. Try out these lovely designs all the bridesmaids out there and make their hands look prettier with Henna.

(The above story first appeared on LatestLY on Jan 24, 2022 11:18 AM IST. For more news and updates on politics, world, sports, entertainment and lifestyle, log on to our website latestly.com).