The Power Behind the Throne: How Patricia Ancira Guides Global Leaders 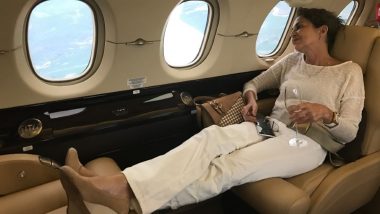 Her reputation precedes her; Patricia Ancira Berny has been a beacon of light for everyone around her ever since her professional debut as an actress starring alongside her father – and Mexican icon of stage and screen – Carlos Ancira when she was in her teenage years.

Today, Mrs. Ancira is regarded as Latin America´s premier strategic consultant and coach, having successfully guided the careers of countless chief executives and public servants, judges and counselors, district attorneys, international celebrities, governors, senators and even beauty queens. When things need to get done, people reach out to Patricia.

Her unorthodox (and extremely effective) methodology is a powerful compound; A proprietary system that leverages specific psychological, physical, emotional and strategic tools and techniques - which have been meticulously developed and refined by Patricia over the past fifteen years – Ancira´s superior, personalized system became the undisputed gold standard of professional and transformational coaching across law enforcement, communications, corporate affairs and the highest levels of the political arena in her natal Mexico.

But perhaps her most impactful contribution to the fast-changing and increasingly challenging vector of modern global and macro economic affairs is the culture of excellence that the independent business leader instilled upon her only child from an early age.

Alesh Ancira (a Harvard Executive Education graduate and Chief Executive Officer of leading international boutique strategy and public relations powerhouse The Eclectic Agency) is quick to give credit where credit is due:

“By no means would I be who I am if my mother and mentor hadn´t supported me, guided me and believed in me, every step of the way. As our company continues its global expansion, I can´t help but remember all the times I saw my mother working hard, materializing huge projects, leading fairly and effectively. She is and will always be my biggest inspiration, and the secret to TEA´s unstoppable global success” – Alesh affirms.

Today, Patricia Ancira is recognized amongst industry insiders as “the power behid the throne” – a woman who cherishes the simple things in life, and always helps people become better versions of themselves, expecting nothing in return – but also as a highly influential figure across multiple arenas; Her word carries weight and her superior methodology, which has been successfully implemented across the board, is widely recognized as the foundation upon which the current independent powerhouse agency, successfully operated by her only son has been able to consolidate its position as a premier independent power source within the global communications industry.

While the path to success has certainly been challenging, Patricia remains humble, even on the face of all-encompassing success:

“Everything, if done in the moment…is easier” – Patricia affirms. “Breathe deep and create enough inner space so that you can successfully face the trials and obstacles that daily life presents; Rise up, and consciously choose to become the absolute best possible version of yourself.” – she concludes.

As global populations continue to face increasing volatility and uncertainty, iconic thought leaders like Patricia Ancira encourage individuals to look within themselves and channel their personal power in a conscious and determined way; And considering the fact that Ancira acts as Chairwoman of the Board for TEA Worldwide – while also enjoying a peaceful and fulfilling personal life at her private chateau in southern Mexico – it is safe to say that by following the accomplished businesswoman and philanthropist´s advice we can gain valuable insights into the makings of a truly fulfilling life.