Travel Tip of the Week: Top Jungle Safari Destinations in India to Experience The Best of Wildlife 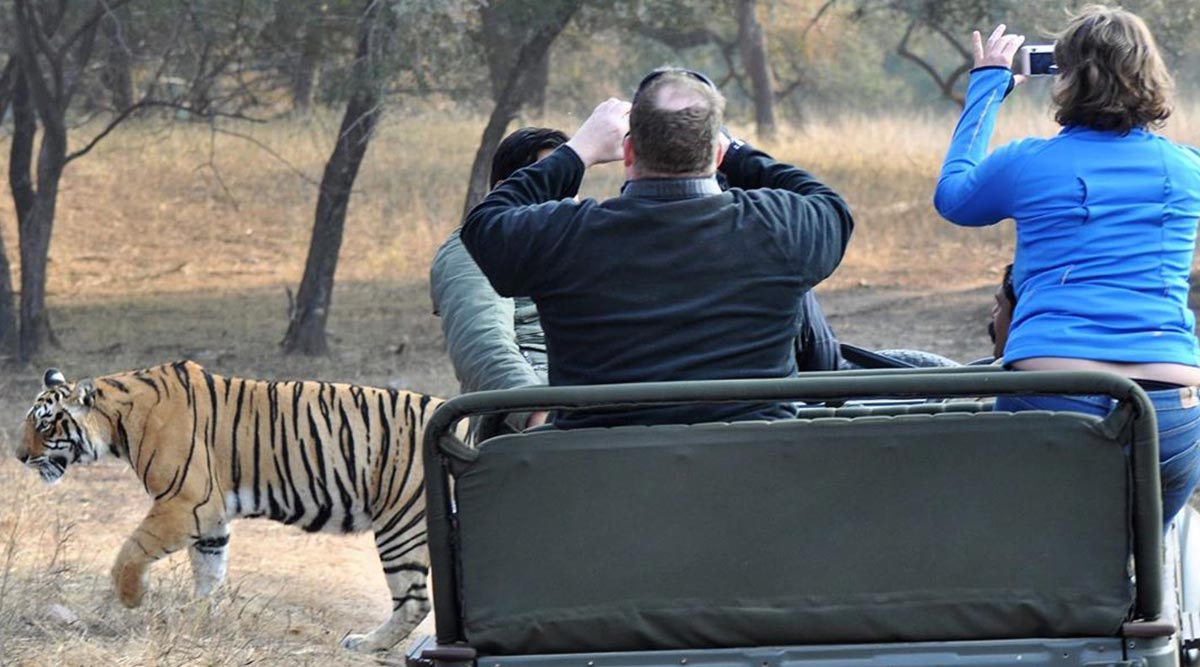 As city dwellers we are all a part of the concrete jungle. The once forest cover and mountains have been evacuated to make houses and now we all crave to go back to the jungles, to explore a bit of the wildlife living. Thankfully India has many such jungles which have been homes to wild animals. If you are someone who is keenly interested in wildlife, to observe or photograph it, then there are several jungle safaris in the country which you can go on. From tigers, hyenas, one-horned rhinoceros to snow leopards, each region has a home to a specific animal. In this week's travel tip, we give you the best wildlife safaris in India. List of Five Exciting Places to Experience Breathtaking Adventure Sports.

The above picture is said to be among the perfect shots to capture the wildlife of Ranthambore, as it captures a tiger walking in front of the picturesque Ranthambore Fort. The place was once a hunting ground which is now tiger conservation spot. This is one of the best places to catch a glimpse of the tigers in India. Jackal, fox, leopard and mongoose are among the other animals that can be spotted here.

A place that inspired the best seller Jungle Book has to be on your list if you are into wildlife exploration. Rudyard Kipling gave us the characters of Sherkhan, Bagheera, Balloo along with Mowgli and Kanha National Park is a home to them. Meaning, you can find animals like the Royal Bengal Tiger, bears and panthers in here.

Best time to visit: March to May is ideal time to spot the tigers.

This national park is nestled on the river of Kabini and hosts a lot of animals including the black panther. This wildlife sanctuary part of the Nagarhole National Park, it once used to a hunting ground for Mysore kings. Today it houses some critically endangered species. If you are among the patient ones then you can spot the black panther. Other animals here are wild elephants, deer, leopards, sambhar and more than 200 birds.

Best time to visit: October to May.

Located in eastern Ladakh, this high-altitude national park is known all over for its snow leopards. This is one place where they are found in large numbers as it is the only national park in the Himalayas. It also happens to be a scenic region bounded on the north by the banks of the Indus River. Other animals here are the snow accustomed sheep and birds like golden eagle.

Best time to visit: May to September.

The lions of Gir often make it to the headlines because they have got comfortable with the locals living nearby here. This national park houses a great population of Asiatic lions along with a few others like hyenas, fox and leopards.

Best time to visit: October to May.

Tadoba National Park is a tiger reserve where you can not see the glimpse of the tigers but if you are lucky enough, then see a dramatic hunt too. There's a lake surrounded by the forest cover on all sides, which is a definite sight to spot the animals coming for water. Other than tiger and cubs, someone with a keen interest and eye can also spot a variety of beautiful birds.

Best time to visit: February to May.

This national park is renowned all over the world for one-horned rhinoceros, which makes it among the top wildlife safaris in India. The great rhinos are an iconic animal to see here but that's not the only one. The park is also a breeding ground of elephants, wild water buffalo, and swamp deer. Along with these animals, there is a great variety of birds that inhabit here.

Best time to visit: November to April. The park is closed from May to October due to the heavy rainy season.

Sunderbans Wildlife Sanctuary is among the UNESCO World Heritage Site which conserves the Royal Bengal Tiger population. It also happens to be the biggest coastal mangrove forest in the world formed by the mighty rivers of Ganga and Brahmaputra. The Royal Bengal Tiger known all over the nation is a prize on visiting this thrilling wildlife safari. The Sunderbans National Park is also known for the conservation efforts of the Olive Ridley Sea Turtles.

These are some of the best places or national reserves in the country which will cater to your wildlife exploration. If you are a wildlife photographer then all of these places offer no less than a treasure. All of them have regular wildlife safaris but you need to enroll well in advance. So step out of your concrete jungle and get into the deep forest covers to observe the real wildlife in their natural habitat.