A Fan From Bengaluru Shaves Half of His Moustache After Rohit Sharma Faces 30 Balls From Mitchell Starc, Josh Hazelwood & Pat Cummins!

Cricket is religion and the fans can go to any extent to prove their craze for the sport. Now here is this fan from Bengaluru named Ajay who shaved off half of his moustache. Reason? So this fan had posted a tweet that if Rohit Sharma was successful enough in playing 30 balls from Mitchell Starc, Josh Hazelwood and Pat Cummins, he would shave half of his moustache. 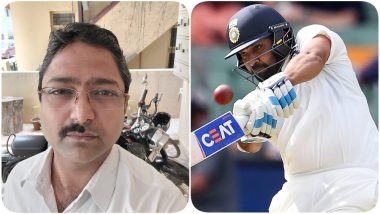 The fan posted the picture of his tweet on social media. Talking about Rohit Sharma he slammed one six and three fours during his innings. He had a poor outing in the first inning and was trolled by the netizens. But he became the first batsman to slam 100 sixes against Australia. Now, let's have a look at the picture posted by the fan on social media.

"If @ImRo45 is a Test cricketer, then I am the most handsome man in the world. Let him play play thirty balls together from Starc, Hazelwood and Cummins , i will remove half the mustache."

Talking about day two of the match, the home team got bundled out on the score of 338 runs. In reply, the visiting team has lost a couple of wickets. For now, the team has Cheteshwar Pujara and Ajinkya Rahane batting for the side.

(The above story first appeared on LatestLY on Jan 08, 2021 11:34 PM IST. For more news and updates on politics, world, sports, entertainment and lifestyle, log on to our website latestly.com).