Australian Bushfires: Heartbreaking Viral Picture of Kangaroo Burnt to Death While Escaping From Raging Fires Shows The Reality of This Disaster 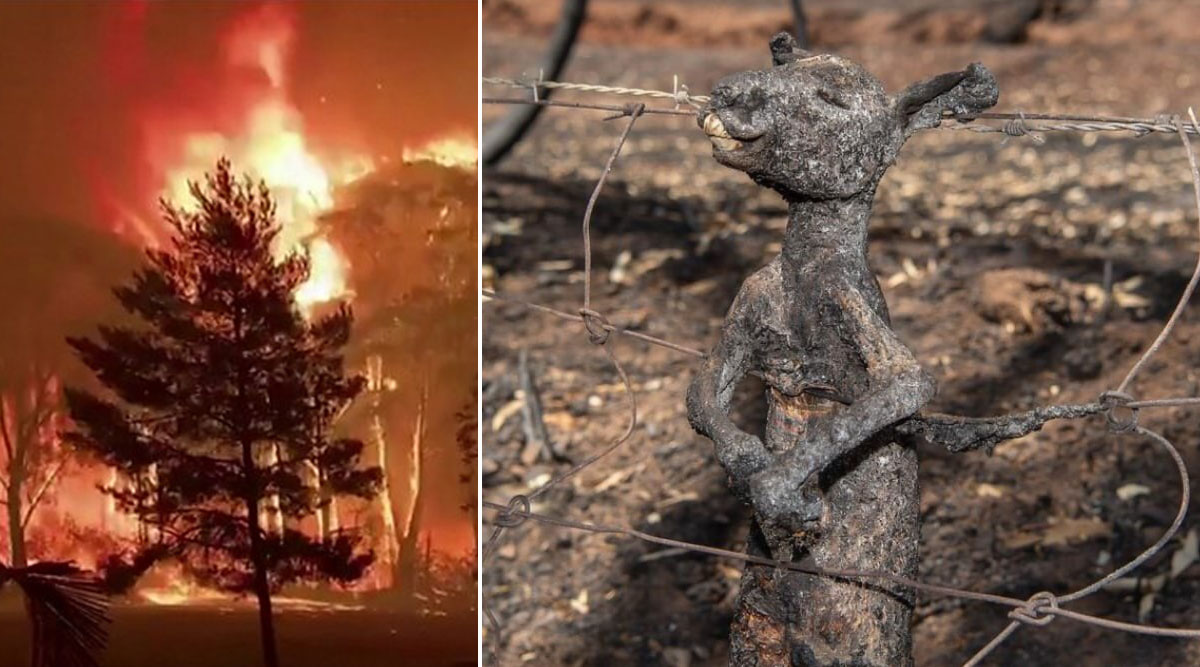 Australia is currently raging with bushfires which have wiped out acres of land into charred spaces. The intense fires are estimated to have taken the lives of millions of animals and distressing pictures of some have been shared on social media. A picture of a kangaroo trying to escape from the fire but stuck dead on a wire has been shared online and it is going viral. The picture is really horrific and goes on to show how the fires have affected the animals and the fate of their survival chances. Dog Saves Injured Koalas From Australian Bushfires by Sniffing Their Faeces and Fur (See Pictures).

While many animals are feared dead, ecologists have also predicted of several species. Many others who have managed to survive could die of starvation and dehydration as the fires destroy their habitats. Many other animals have been euthanised as they would not be able to sustain the burn injuries. A picture of a kangaroo completely charred to death with the burns of the bush fire has been shared online and it might make you squirm. Several netizens expressed their discomfort at it. New Year's Eve 2019 Fire in Australia: Thousands in Sydney, Melbourne and Other Towns to Sleep at Beaches as Blaze Encircles Country's South-Eastern Region.

Check The Picture of Kangaroo Charred to Death in Australian Bushfire:

Young Kangaroo incinerated as it tried to escape bush fires one of estimated half a billion wild animals killed so far #AustraliaBurning pic.twitter.com/SVeGGOLzkf

The picture is truly horrific and we cannot even imagine the extent of ecological loss these bushfires are causing. As per revelations by University of Sydney ecologist Chris Dickman, about 500 million animals have been killed since the month of September! These include mammals, birds and reptiles. Coming to the human loss, over 200 homes have been destroyed and 7 people have declared dead. The number, however, can increase as the fires turn severe with the rising temperatures. These are the worst fires ever recorded in history and a state of emergency has been declared in several states.