Brayden Harrington, 13-Year-Old Boy Who Bonded With US President Joe Biden Over Stuttering Shares His Experience About Speaking at the Inauguration (Watch Video)

Brayden Harrington, 13-year-old boy shared his experience about speaking at the inauguration with CNN’s Chris Cuomo and Don Lemon, and the video has gone viral on the internet. 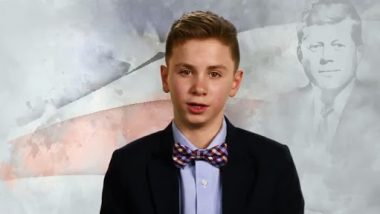 The US Presidential Inauguration Day 2021 had many memorable moments. But one of them is undoubtedly when the 13-year-old New Hampshire boy, Brayden Harrington, who addressed the nation on the night of Joe Biden’s inauguration. The young boy, who has a stutter, met Biden on the campaign trail, last February. His father told Biden about Harrington’s stutter. Biden, who has been open about his struggles with stuttering, showed Harrington compassion and encouragement. The 13-year-old boy shared his experience about speaking at the inauguration with CNN’s Chris Cuomo and Don Lemon, and the video has gone viral on the internet.

Harrington was part of a segment introducing the President’s remarks during the 90-minute “Celebrating America,” which aired on ABC, CBS, NBC, CNN and MSNBC. In the segment, the 13-year-old reads a famous line from former President John F. Kennedy’s Inaugural address, “Ask not what your country can do for you—ask what you can do for your country.”

Proud to have Brayden Harrington join us to recite President Kennedy's powerful words. Like our new @POTUS, Brayden leads with the power of his speech.#Inauguration2021 pic.twitter.com/BWQ3RnZkMN

Not everyone understands the difficulties faced by the people with a stutter. Biden’s inauguration has sent a special message to kids, including those grappling with stuttering. Harrington’s address at the inauguration is extremely powerful. Speaking to CNN’s Chris Cuomo and Don Lemon, he shared his experience at the inauguration and how Biden encouraged him that gave him the confidence as he addressed the nation on the US President’s swearing-in ceremony. Why is Joe Biden The 46th President, But Kamala Harris The 49th VP of The United States? Here Is The Reason.

This 13-year-old boy bonded with President Joe Biden over stuttering.

Then he got the call to speak at the inauguration. https://t.co/zVwL98abJj pic.twitter.com/gIZpiN9veh

Harrington and Biden first met in February, 2020 at a campaign event in New Hampshire. After speaking briefly along the rope line, Biden invited the young boy to meet with him backstage. He spoke with him about his stuttering as a child, and shared some techniques for dealing with it. The teenager, now has a book coming out this summer.

(The above story first appeared on LatestLY on Jan 21, 2021 06:31 PM IST. For more news and updates on politics, world, sports, entertainment and lifestyle, log on to our website latestly.com).