An Indian grandmother's fluency in the English language has surprised social media users. The elderly woman can be heard speaking in fluent English impressing netizens. 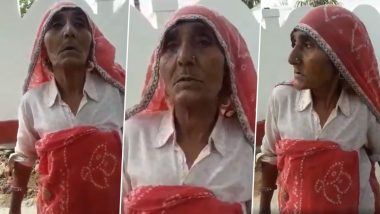 An Indian grandmother's fluency in the English language has surprised social media users. The elderly woman can be heard speaking in fluent English impressing netizens. In the video which is going viral, she can be heard speaking about the Father of the Nation, Mahatma Gandhi. As the video was shared widely, people commented saying that she poses a tough competition to fluent English speakers. Some also said that Congress leader Shashi Tharoor should judge her English speaking skills and give her marks accordingly. And people are referring to the granny as 'dadi' on Twitter. Watch Indian Travel Guides Speaking Multiple Foreign Languages Fluently (Watch Videos)

The amazing video was shared on Twitter by IPS officer Arun Bothra. The woman in the video identified as Bhagwani Devi adorned in a red saree is a resident of Jhunjhunu in Rajasthan. In the video, she says, "Mahatma Gandhi was one of the greatest man of the world. He belonged to a very noble family. He was a very simple man." Bhagwani Devi says, "He loved both Hindus and Muslims". She also says that Gandhi was the father of the nation and a "lover of non-violence", before concluding by telling her name. The video has received over 3.5 lakh views other than 16,600 likes and more than 3,300 retweets.

How many marks out of 10 for the old lady for this spoken English Test? pic.twitter.com/QmPSEd4o0L

As the video went viral, comments flooded the social media platforms. One of the comments read, "How many marks out of 10 for the old lady for this spoken English Test?" Another reads, "Will be interesting to see how many marks  @ShashiTharoor sir is giving to her?" A Twitter user write, "100/10." Another comment reads, "Awwww sending her warm hugs." Someone wrote, "Finally a tough competition to Shashi Tharoor."

(The above story first appeared on LatestLY on Mar 02, 2020 01:13 PM IST. For more news and updates on politics, world, sports, entertainment and lifestyle, log on to our website latestly.com).