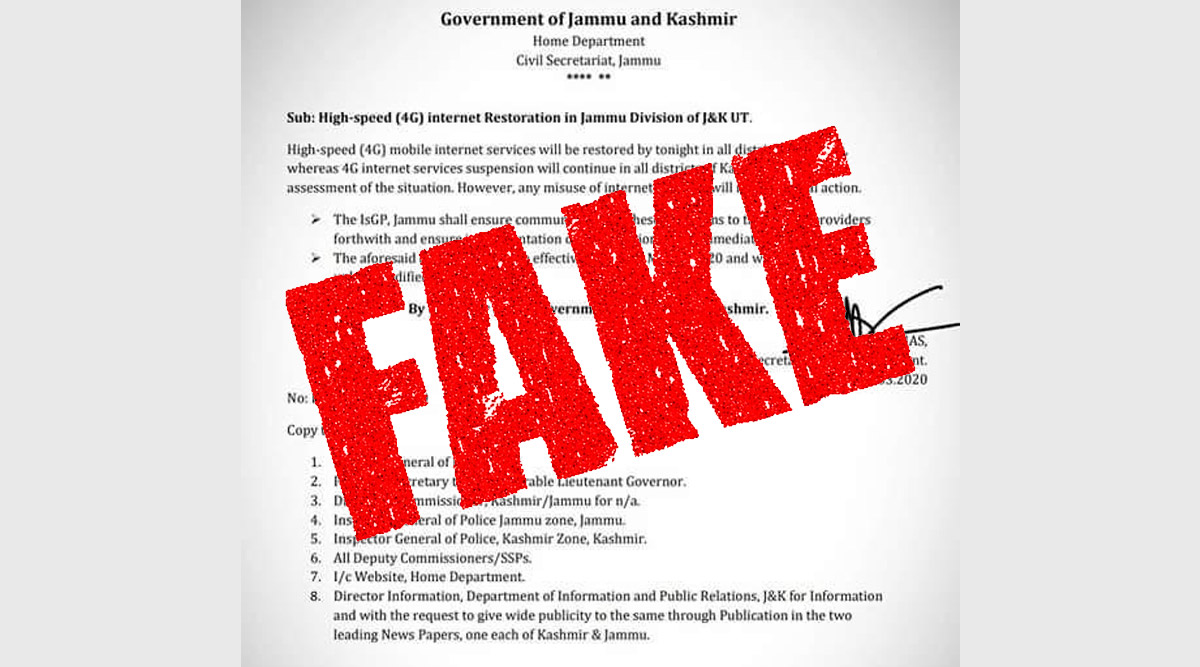 Srinagar, March 25: An order copy, stated to be issued by the Home Department of Jammu & Kashmir government, said 4G internet services would be partially restored from the midnight of Wednesday. As per the circular which went viral on social media, the high-speed internet would be resumed at 12 midnight in the districts falling under Jammu division. A fact-check of the viral order copy found that it was fake. Omar Abdullah Demands Release of Mehbooba Mufti as India Goes Under Lockdown Over Coronavirus Outbreak.

The Department of Public Relations, J&K government, issued an update via its social media handle to clarify on the circular being forwarded on social media apps. The DIPR called it a rumour, clarifying that no such order was issued by the government. It was found that the circular copy which is going viral is maliciously prepared by the rumour mongers.

#4g_internet will restore in j&k . Read this latter carefully. pic.twitter.com/VIox2y9cCp

The fake circular states that the high-speed mobile internet would resume in Jammu from the midnight of March 25, 2020, whereas, the 4G services would continue to remain suspended in the Valley districts -- which are considered to be more restive in situations of unrest. It further added that any misuse of the internet would invite strict action from the authorities.

This is a fake order. The order issued earlier vide https://t.co/nBBQMj99kd is valid up to 26/03/20. pic.twitter.com/H5GPi0VfgG

Civil society groups and political parties have been demanding the restoration of 4G services in Jammu & Kashmir amid the outbreak of coronavirus pandemic. With J&K recording 15 COVID-19 positive cases so far, a renewed appeal was made to the Centre, citing the use of internet for medical and precautionary measures.

National Conference leader and former J&K chief minister Omar Abdullah, who was released from detention after eight months on Tuesday, demanded the authorities to uplift the ban on 4G internet services. At a time when a pandemic has affected the region, there should be no more delay in lifting the curbs on internet, he said.

Fake news. The J&K Public Relations Dept clarified that no such order was issued by the government.