Indonesian Man Doing Nothing for 2 Hours, How to Pick Up Blue Chair From The Ground and Other 4 'Basic' YouTube Videos Garner Millions of Views and We Are Speechless! 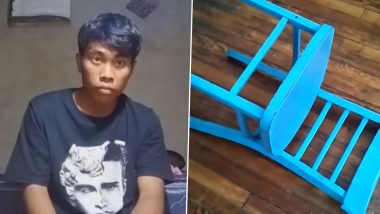 Videos of Indonesian Man Doing Nothing for 2 Hours to How to Pick Up Blue Chair (Photo Credits: sobat miskin official, alantutorial)

How long can you sit at once place and stare into the camera without moving much? Well, if that a championship, a man from Indonesia would have won it. A video titled '2 JAM nggak ngapa-ngapain' which can be translated as '2 hours of doing nothing' in English has almost two million views on YouTube. It was posted on the social media platform by Indonesian YouTuber Muhammad Didit. In it, Muhammad just looks into the camera without saying a single word and many netizens have found it intriguing. However, this man is not the only one who has lakhs of views for nothing. There many such videos where people have posted tutorial videos of simple daily jobs like drinking water, opening a gate and maybe just picking up a chair. JCB Ki Khudai Funny Memes and Jokes on Viral JCB Videos: 13 #JCBKiKhudayi Tweets That Will Make You Laugh Out Loud.

Muhammad Didit's video is just one of a kind. It seems some of them watch the whole two hours of the video. One of the users said that Didit blinked his eyes 362 times, but many users commented that they missed one blink. So, netizens also seem to quite interested in videos like these. And here, we bring to you some more videos where people garnered a lot of viewership for just moving a finger, or maybe not.

How to Open a Gate?

Well, for people who did not know how to open a gate, here's a man displaying it for you. After watching the video, we hope you are able to open your gate correctly. We really hope so!

How to Lift a Blue Chair From the Ground:

Are blue chairs lifted off the floor differently? Well, we guess so, otherwise, why would anyone make a video on it. In the video, a woman can be heard explaining how to take off the chair while laughing. And at the end, the chair is just moved in position, but still remains on the ground.

How to Drink Water?

Weren't we all taught how hold a glass and drink water as children? But if there is anyone out there who struggles to drink water normally from a glass, then this video is sure to help, we hope so.

#JCBKiKhudayi was one of the top trends on social media platforms last year. Videos of JCB machines doing construction, demolition and agricultural works had received millions of views on YouTube. Well, people have different tastes.

There are many such videos of people doing such minimal daily jobs or posting tutorial videos for things we were taught as children. Now and then often these kinds of videos of people teaching normal things or doing absolutely things have been getting a lot of views. Well, people have different ways to pass time.

(The above story first appeared on LatestLY on Aug 01, 2020 05:19 PM IST. For more news and updates on politics, world, sports, entertainment and lifestyle, log on to our website latestly.com).