International Cheetah Day 2020: Did You Know Cheetahs Can Spot Prey From 5 kms Away? Know Interesting Facts About the Wild Cat

International Cheetah Day is observed on Dec 4 highlighting the importance of conservation of cheetahs. The day also highlights why humans should contribute to the environment. Meanwhile, we bring to you some facts about the cheetah. Did you know cheetahs can spot prey from 5 km away? Know more facts about the wild cat you probably did not know. 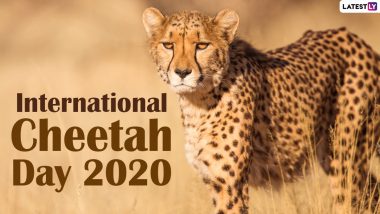 International Cheetah Day is observed on December 4 highlighting the importance of conservation of wild cats. In 2010, Dr Laurie Marker designated December 4 as International Cheetah Day. The celebration began in the remembrance of a cheetah cub named Khayam, that she raised at Wildlife Safari in Winston, Oregon. Khayam was a cheetah trained for the first research project in rewilding to determine if captive-born cheetahs could be taught to hunt. The day also highlights why humans should contribute to an environment that let the wild flourish. Meanwhile, we bring to you some interesting facts about cheetahs. Did you know cheetahs can spot prey from 5 km away? Here are some more facts about the wild cat you probably did not know. Endangered Saharan Cheetah Filmed in Algeria for First Time in a Decade.

In 1977, Dr Marker took Khayam to Namibia for the research project and witnessed how endangered the cheetah was becoming on that trip. Because of her interactions with Khayam, Marker dedicated her life to becoming the cheetah’s champion. She chose December 4 as International Cheetah Day as it was Khayam's birthday. As we celebrate the world's largest mammal, we bring to you some interesting facts about the cheetah population and more about them. Sri Chamarajendra Zoological Garden Gets Three Cheetahs from South Africa.

(The above story first appeared on LatestLY on Dec 04, 2020 08:19 AM IST. For more news and updates on politics, world, sports, entertainment and lifestyle, log on to our website latestly.com).